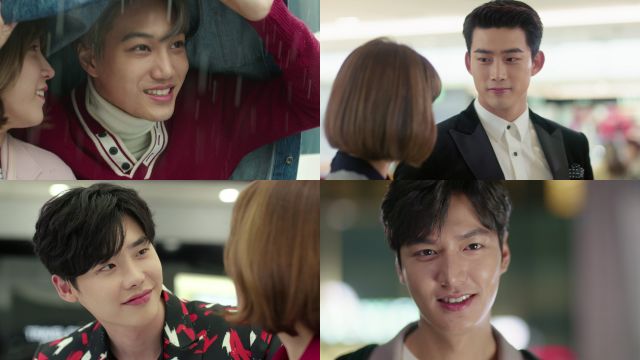 So whoever's responsible for uploading "Seven First Kisses" only hired translators for the first seven episodes. Which means if you want to watch the individual endings or the Lee Min-ho segment, you'll have to go in blind. Well, then again it's the same general joke for all of them. Title notwithstanding there is no actual kissing in this drama. Also Lee Min-ho is a travel writer. Kai is Soo-jin's former student. Ok Taecyeon is the passionate, rebellious heir of a major corporation. And Lee Jong-suk is pretty much just himself.

I wonder how "Seven First Kisses" was written. I'd like to think the seven Lotte Duty Free Models were asked who they wanted to be in Soo-jin's fantasy and they responded accordingly. Kai loves his noonas. "Ok Taecyeon" likes acting on general principle but no one will hire him for the explicitly ridiculous roles. Lee Jong-suk just likes modeling. And of course Lee Min-ho likes traveling, considering his entire career is practically based overseas now.

None of this really has much to do with the objective quality of "Seven First Kisses" but the whole concept of this drama is just fanservice, plain and simple. It's really not possible to read much more into the drama beyond that. Not that this is a significant problem. There's only so much narrative analysis that can be had for a drama that is little more than an advertisement, however cute, adorable, or funny that advertisement may get at points.

Really, what good consistent strength there is in "Seven First Kisses" lies squarely on the shoulders of Lee Cho-hee, who is a largely passive participant in all these stories yet somehow manages to take charge in every single one. The whole set-up of circumstances contriving to give Soo-jin a chance to kiss the Lotte Duty Free Models is...really just plain silly. Yet time and again Lee Cho-hee fills the screen with excitement, bewilderment, and terror all at once.

And those emotions, really, are what make up the strength of Korean branded entertainment worldwide. Whether it be in the most clichéd genre setting, the most blatant wish fulfillment or even just everyday life, there's a story to be told. It's easy to get engaged in spite of ourselves. So it is that for all the blatant commercialist trappings I actually did like "Seven First Kisses" a fair bit, just as a sort of curiousity to know what all those actors are doing these days.