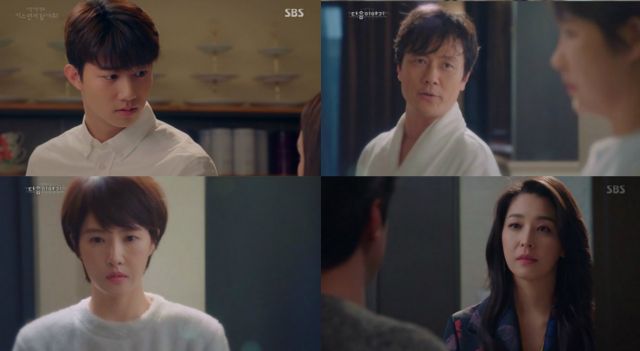 So the dog dies. That was, of course, inevitable. What was less inevitable is that something serious happens while Soon-jin was doing silly stuff with Moo-han. Naturally, she apologizes, even though this wasn't her fault. But how does Moo-han respond? He doesn't actually. Moo-han just looks on in his usual defeatist stone-faced silence. There's no anger, no guilt, nothing. Moo-han has long since decided that this was just the way things have to be. If Soon-jin wants to apologize, that's her business.

Naturally this is nothing new for Moo-han. But then in episode fourteen we finally meet his ex-wife Seok-yeong (played by Han Go-eun) and it's eeriehow she has nearly the exact same attitude. The creepiest twist is when we see I-deun engage in the exact same attention-seeking behavior with her mother that she did with her father and it's just, whoa. I-deun's feelings aren't specific to Moo-han being an absentee father, that's just how she deals with parents in general.

Elsewhere we also see Soon-jin awkwardly come to terms with her new living situation. An intervention is staged by Kyeong-soo of all people. I am definitely seeing more why Kyeong-soo remains important to Soon-jin's life. He's the only person who isn't intimiditated by Soon-jin. No one else knows how to deal with Soon-jin in an antagonistic way. So that means it's up to Kyeong-soo to browbeat Soon-jin into asking other people (who are not Kyeong-soo) for help.

I like Soon-jin's sense of shame. Well, no, I don't like it literally, since undeserved shame is probably Soon-jin's single most tragic character flaw. But it's instructive with regards to how Soon-jin feels as an older woman. The scene at the grocery store with Ji-min and her young daughter Ji-soo (played by Jo Ah-in) especially puts that into sharp relief. Ji-soo considers Soon-jin to be an inherently cool and admirable person whatever she does. That sense of childhood innocence is something that is generally lost on Soon-jin unless she sees it in other people.

"Shall We Kiss First" is by nature an extremely passive drama. That Soon-jin occasionally livens things up by intentionally being silly is a very intentional attempt to escape that existence on her part. Moo-han likes Soon-jin because when he has an easy time forgetting about his inherently sad existence when they are together. Observe how getting trapped in the bus triggers no worry or alarm for Moo-han, in spite of horrible past experience- because in that moment, the future doesn't seem important.

"[HanCinema's Drama Review] "Shall We Kiss First" Episodes 13-14"
by HanCinema is licensed under a Creative Commons Attribution-Share Alike 3.0 Unported License.