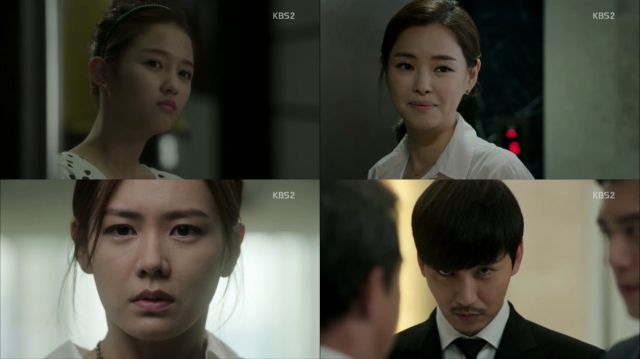 "Shark" gets a major jolt this episode with a shocking development: something actually happens. Quite a few things actually- there's deliberate confrontations, investigations yield definite results, and measures are taken to silence anyone who gets in the way. This is the first time since the early episodes that there's the stalking, predatory behavior we would expect from a drama called "Shark", and it really comes together quite well.

The episode starts out with Hae-Woo facing I-Soo and demanding an explanation. Seeing their actors play off of with each other, when they both know exactly what the current situation is, is immensely satisfying. For the first time, I really apprecfiate how Hae-Woo's attitude has changed from her basically self-destructive teenage self to something actually fairly optimistic. It's a bit of a startling development, and frames her actions in the drama so far much more clearly.

This also raises the profile of Joon-Yeong, the main change in Hae-Woo's life since those teenage years, and answers pretty clearly that yes, he has been a good influence. At the same time, we finally get a taste of why that might be a bad thing, as Joon-Yeong is seen in this episode explicitly acting to protect the Jo Hotel line and its patriarchs. More significantly, he's actually doing a good job. I doubt he's a serious match for I-Soo, but Joon-Yeong's role has now been defined in such a way that's much more dynamic in the narrative than what we've seen so far.

The importance of mutual respect has been an ongoing theme, and this episode gives us many examples of characters facing each other and it being obvious to the audience who's holding back and who's being more respectful than is really deserved. I-Soo and Yeong-Hee once again stand out as characters who, in spite of not really trusting each other, still have a friendly, respectful working relationship together. It's fascinating how, even though I-Soo seems to exist in a warped, evil world, his friendships actually seem a lot more meaningful because I-Soo knows exactly where he stands. He doesn't need to bother pretending to be trustworthy when he knows no one expects that from him.

The only problem is that I kind of mistrust that narrative to keep moving at this brisk, effective pace. This might be the one breather moment before we spend another half a dozen episodes on the brooding. But there's a bit more cause for optimism this time. Events at the end of this episode and previews for the next demonstrate major plot shifts that can't be weaseled out of and I look forward to seeing how this is handled.