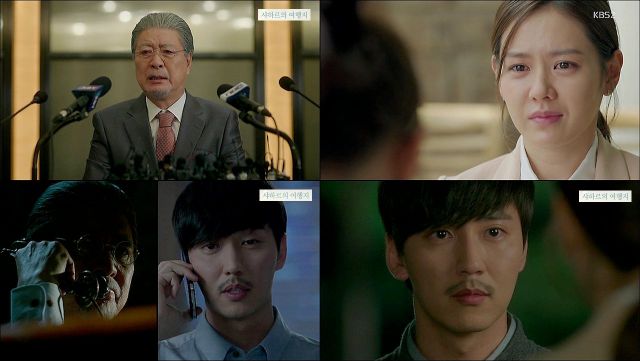 The Jo Family patriarchs have started taking definite action to defend themselves. This tells us little about who they are that we don't already know. Sang-Deuk's top priority is trying to keep his empire intact- which most definitely includes keeping his granddaughter's love. He'll go to any lengths to preserve this, whether it be via criminality or crocodile tears. Ee-Seon is still basically an adult child, who storms and temper tamptrums until daddy gives him unconditional instructions that are not to be disobeyed.

I get the feeling that their comeuppance is being delayed for maximum impact. I-Soo mostly just sits and waits this episode, while doing his best to make clear he's unfazed by Sang-Deuk's theatrical techniques. He does, however, make one very smart and deliberate move to unmask essential information about Sang-Deuk's operation. Whatever payoff he's planning with this intel, I imagine it will be glorious. That may just be optimism, though, this episode is mostly build up with more precious glimpses of heretefore unseen character conflict.

It's immediately noticeable, for example, that Hae-Woo and Joon-Yeong seem more distant than before. It's not that anything is wrong with the relationship- they've just been so caught up in work (her investigation and his damage control) that there's not much for them to exchange but the usual intimacies. Now, in a normal marriage where both spouses are busy, this isn't necessarily a problem. The drama here is that we in the audience know that they're working on opposite ends of the same fight, though neither know it yet.

Part of the reason I have difficulty seeing the Jo Family patriarchs as a serious threat to I-Soo is that so much of their "success" so far is based on unearned trust. Hae-Woo isn't really convinced by Sang-Deuk so much as she really just wants to believe him, since the alternative is really awful. Joon-Yeong is much less self-critical, and continually gives them the benefit of the doubt without really thinking about it. It's pretty obvious that Hae-Woo's familial ties aren't going to survive this drama's run- but Joon-Yeong may well convince himself that the situation isn't as bad as it seems even when all the facts are revealed.

"Shark" is continuing to move in the right direction, but I remain unsure as to whether it will continue on this course or detour into something dull again. There's a strong, constant flow of communication between characters that keeps everything livened up, but without the appropriate climax this could all easily feel like a huge cheat. All that can be done right now is see where the next episode will deliver emotionally where this one just didn't quite make it.