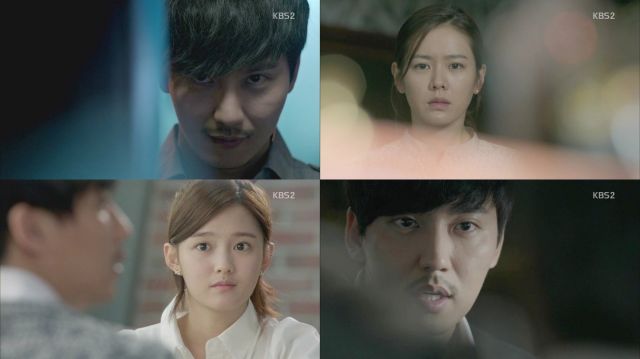 It would seem that I wrote too soon about Joon-Yeong's apparent hesitance. The events of this episode and the last have apparently done a lot to stoke his latent hostility, but where this is heading is still wonderfully unclear. He still has serious trouble opening up to Hae-Woo about what's making him so upset. I realize, again, that this isn't because they have a bad relationship but rather that their connection to each other is based so much on the good times. And those times are going to be out of the picture for the foreseeable future.

I-Soo's scheming continues at the proper pace. It's interesting to watch him deal with similar inner personal turmoil only to shrug it off a lot more easily. It takes very little to remind I-Soo why he's doing what he's doing, and he goes into the next stage of the plan with no scruples or worries. His skulking about in the shadows outside is a welcome contrast to Sang-Deuk, who never leaves his desk. There's the very definite sense that Sang-Deuk's apparent unwillingness to act directly is going to be his undoing.

There's some curious imagery that's been cropping up at the beginning which I'm still having trouble making sense of. Inside the Jo family mansion, we often see Sang-Deuk framed with a simple moving shot that mostly obscures him behind diamond window panes and darkness. It's been difficult to tell so far what this meant, mainly because Sang-Deuk was very absent for too much of the first half of the drama. But it really heightens the contrast of how he operates with I-Soo.

For one thing, when I-Soo has guests come over, he actually turns the lights on. It's a subtle but good social element on display, that even though I-Soo clearly prefers brooding and mulling over the next stage in his revenge plan, he's actually able to switch gears and be able to enjoy the company of others even when they're being kind of annoying. Even in his basically duplicitous dealings with Hae-Woo, there's a frankness to his emotions that's reassuring.

"Shark" has really finally gotten good. I'm actually interested even in the somewhat silly dilemma of characters agonizing over old photographs. So much of this show now has the tension of hanging over a precipice. If Sang-Deuk is really only the discovery of one photograph away from losing everything he's ever cared about, how much power did he ever really have? I-Soo's cool, collected composure is, by comparison, something that's really worth fearing.