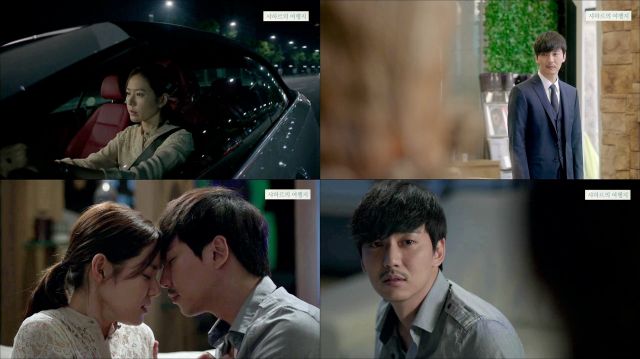 "Shark" has gotten to be quite busy. So much happens in this episode that as I try to sit down and take stock of it in my head, I'm amazed that this drama doesn't feel more rushed. Nearly every character either does something physically intense and dangerous, or suffers a severe blow to their emotional well-being. The ones who aren't are still heavily affected by the story, as everyone is in palpable danger just from being tangentially involved in a confict that's about to go from investigation to war.

To date, everything has gone according to plan for I-Soo. Having achieved crucial information at the end of the last episode, he now bides his time waiting for the moment to unleash its maximum damage on his hapless prey. His apparent indifference to this week's collateral damage is a strong indicator of how little genuine human sympathy he has for anyone anymore, including himself.

As far as I-Soo is concerned, everyone who is involved with Gaya Hotel group in any way isn't worth caring about. The apparent success of his machinations continues to underscore just how underwhelming the Jo family patriarchs are as villains. This isn't because they're bad or incompetent so much as they've never had to deal with anyone this serious. It's a credit to this drama's ability to build tension that evey sequence is still intense and viscerally satisfying.

At this point, the only true threat is the henchman. And he's only a problem on the indvidual level. It's highly unlikely that his masters can acually be saved. The henchman is capable of doing damage in the immediate sense, though, and I think that's where we're heading soon in terms of emotional resonance. I-Soo's plan is designed to maximize pain and emotional suffering, and he knows full well that Sang-Deuk needs at least some hope for this to work. Wiping out the henchman completely makes all this happen too soon- but as long as he's out and about, the henchman is dangerous, and not necessarily to Sang-Deuk's co-conspirators alone.

"Shark"'s pacing has taken a turn for the excellent. Scenes are either filled to the brim with significance and concern, or are short enough that the emphasis on exposition does not become overly burdensome. Obstacles and contrivances are dealt with (or at least responded to) almost immediately. While it's not at all clear what will happen next, as long as "Shark" keeps hitting these notes, I'm willing to follow it nearly anywhere.