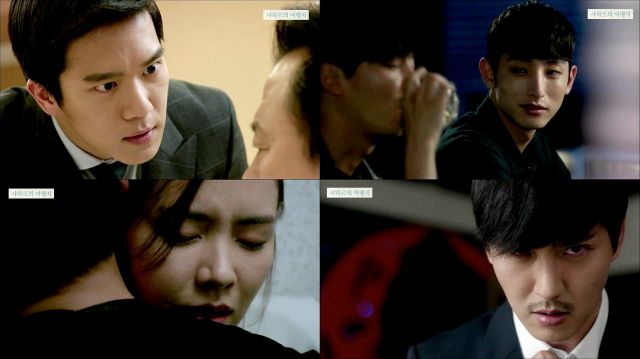 The walls of trust are quickly disintegrating. They've never really been in good shape, but I think it's finally starting to hit Jo Sang-Deuk that most of the "respect" people give him is either out of a combination of obligaton and fear. He's so desperate to avoid admitting this, though, that instead more pits are being dug that are only going to make his final comeuppance all he worse and longstanding.

This should make for enjoyable drama, but unfortunately I-Soo is still a lot more human than he's willing to admit, and we're right there with him on those same worries. This week's cliffhanger is surprisingly tense and scary, and the build-up is expertly handled as well. Most of the characters in this show are like the audience, in that they basically know what's going on and can predict what's coming. They just get blindsided so fast that poor decisions are made before they can consider all the possible variables.

There are all sorts of neat revelations here that are subtle, but not exactly foreshadowed. It's just that the full scope of every character's allegiance and rlationships have not been made full knowledge yet because, up until this point, there's been no need for us to know about that. This is a weird point in the series to start with plot twists- we're too far in for more character development but not close enough to finishing that we can get in the final "ah-ha!"' moments.

Yet I have a fair amount of faith that we're going to wring some good sequences out of this. The way "Shark" is pounding at character insecurities, and forcing them to acknowledge realities that they know but have been avoiding, is absolutely excellent. I was expecting this episode to be more violent. Instead, some much more chilling and dispiriting moments pop up. The weight of these emotional punches make for a far more impressive dissonance than could have been gotten from anything physical.

If nothing else, the script of "Shark" has a very good memory. It seems unlikely that anything that's happened in the last few episodes is going to be forgotten in the mad scramble to find the next essential plot point. I-Soo is unlikely to be the only character gunning for revenge in the immediate future. But whoever else wants a piece of it is going to have to act soon, since they have neither the patience nor the coldness necessary to refrigerate the dish best served cold.