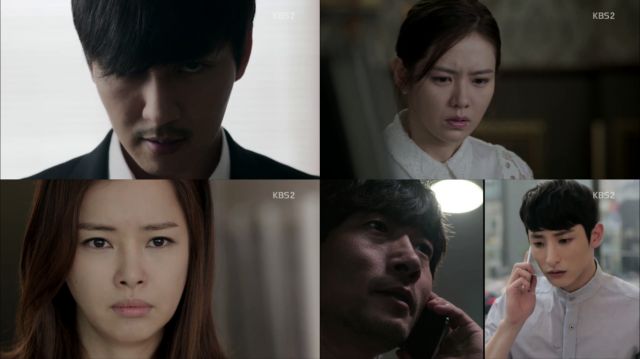 For the first time we see I-Soo in genuine internal conflict. There's no serious problem with his current revenge scheme. But it's painfully clear that, as much as he doesn't want to admit it, there are matters more important to him than just revenge. He jeopardizes contacts, relationships, and secrets in this episode all in a desperate bid to save the last, clearest link he still has to his old life.

While I'm generally loathe of damsels-in-distress, "Shark" handles it fairly well here, somewhat ironically, by making this whole conflict about the man. Because the entire situation is I-Soo's fault. I-Soo consciously delayed dealing with the henchman after discovering his true identity. And he's also been dragging his feet on just telling I-Hyeon who he really is. I-Soo's motives for this are understandable, but only in context of the revenge scheme. As a person, he's been playing this risky and it's finally come back to haunt him.

Sang-Deuk has the exact opposite problem. He's trying to solve the problem of preserving his familial love by engaging in the same underhanded tactics as I-Soo is, and doesn't seem to realize that this completely undermines him. His strategy for dealing with Hae-Woo's suspicions to date has just been to act pitiful and sympathetic and hope she decides to stop questioning him out of empathy. Every time he does this it works less well than it did the last time. Looking at their interactions in a line, it's all too clear that Hae-Woo is out of patience for this- though Sang-Deuk may yet still not understand this.

Tension is effectively built up for this dangerous conflict. As we build up to the final confrontation where I-Soo confronts I-Hyeon's kidnapper. Seeing the situaion from many points of view does a lot to demonstrate the inelegant, brutish nature of the scheme. I-Soo's final solution is comically poetic, and the henchman's reaction is so blase it nearly makes a mockery of the entire build-up. But that's the beauty of the development- it was never a particularly good, or clever plan. It was only ever important because of how it demonstrates the contradiction inherent in I-Soo's character.

Better context is doing wonders for "Shark" right now. A lot of what makes this episode work so well are basic facets that have been present the entire series. High-level camerawork and performances have always been a staple of this show. It's only when the situation is high-stakes, though, that all this can really be appreciated. Another Reversal of Fortune is all it takes.