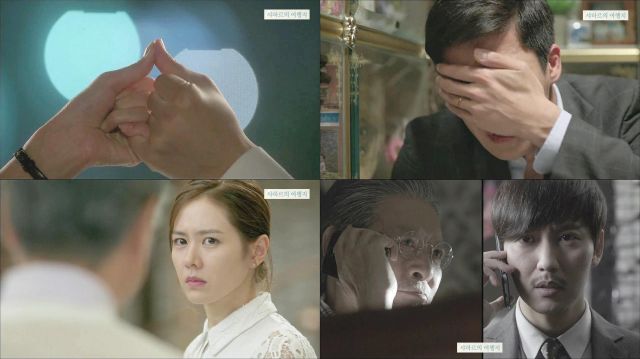 The thrilling segments of this drama have been so intense that I'm actually glad that the story slows down a bit here. I-Soo is able to take a well-deserved rest. Even though the entire kidnapping subplot was his own fault (and he's forgiven for it just a bit too easily), I-Soo is completely on edge and needs time to transition back into his standard predator form. Although whether he'll ever be that cold again is an open question, after his encounter with Hae-Woo.

"Shark" has been treading a fine line in regards to the romance between I-Soo and Hae-Woo. On the one side, it seems like the show wants them to get together. On the other, it has completely refused to demonize Hae-Woo's husband Joon-Yeong in any way. So from a general moral and ethical perspective, it's impossible for the audience to really want this subplot to work out because we know it's cruel to Joon-Yeong and of dubious benefit to Hae-Woo.

This is the episode where Hae-Woo realizes herself that her relationship with I-Soo, when it even isn't an emotional affair, is still horribly problematic. They're depending on each other emotionally way more than is appropriate given what they literally need from each other. The fact that both of them have people they can turn to, people who they safely have no romantic interest in, only makes this worse. Hae-Woo doesn't just look at this objectively- she also sees (as do we) how her attitude toward love here is only marginally different than her scummy family's. The idea that she may have inherited and internalized their attitudes frightens her, as well it should.

With I-Soo out of the picture, his associates pick up the slack and plant the final seeds of dischord. They're not necessarily doing so in a way I-Soo agrees with. However, these actions will definitely accentuate the final stabbing pain of the revenge plot. So in the context of that plan, I-Soo can't fight with them. This can only happen emotionally- and given what's going on with Hae-Woo, that's going to feel just as inappropriate and uncomfortable.

As mentioned earlier, I feel like I-Soo is let off too easily for his role in the kidnapping plotline. But I can't get too upset about it, because the narrative clearly has not forgotten. Now that Sang-Deuk has chosen to be unredeemable and basically sealed his fate as the ultimate victim, the moral ambiguity has to come from somewhere. I'm pleased and optimistic to see that this drama isn't about to let anyone off the hook for ethical behavior.