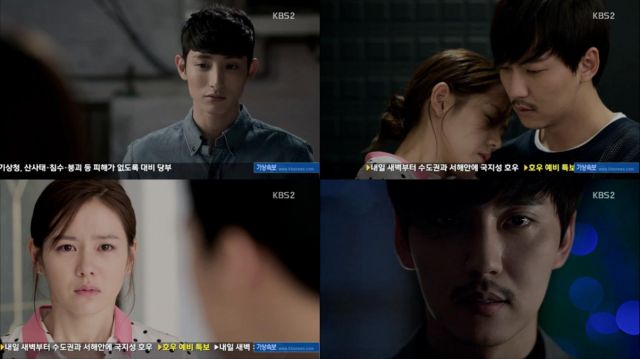 This episode continues dropping bombshells just like the last one did. This time around the surprises are a little more surprising, though still predictable. What makes the contrast work this time is that we're now dealing with the emotions of characters with more agency in the overall plot. I-Soo is hit with every horrible truth that could possibly damage him. Once all of this has soaked in, his next course of action becomes unmistakable.

The relevance of Hae-Woo to the main storyline has always been a bit dubious, so I was impressed with how well-integrated her motivation is with what we're going to see as the final conflict. From the very beginning, Hae-Woo has braced herself for the worst. Hae-Woo has been choosing to believe in her grandfather, but the reality is that there has always been this doubt or she would not have been confronting him like this in the first place.

The significance of this is huge compared to every other character in the story. Hae-Woo firmly believes that the only way any of them can move on from the crimes and mistakes made in the story is to be absolutely truthful and bring everything to light. The way everyone else has been going after their revenge by skulking in the shadows is hugely significant, because they all have something to lose by being transparent. But so does Hae-Woo. Debatedly she has more at stake than any other single character in the story- yet she keeps pushing no matter how obvious it is that other characters just want her to stop.

There's a sadness in all this that's very well-punctuated in the soundtrack. The sad violin makes a return for excellent effect here. While its usage is a bit overwrought, that's part of the point. Even though the overall situation in "Shark" is loaded with typical dramatic tropes, it's quite clear that characters are forcing the situation to be more dramatic than it needs to be by insisting on only allowing one very simple interpretation of events to exist in their mind. The best guard against pain is flexibility and adaptation- not ignoring that which is inconvenient.

Whatever I-Soo's long-winded plan is, it's going to have to come to fruitiion soon. Even as this drama has engaged in much stronger storytelling in its second half, most of the effectiveness has come from good tension and emotional moments rather than deliberate action. A lot of heavy action is going to have to happen fast from here on out. There's so much potential here I'm actually a little worried that much of it is going to be wasted. So many emotionally powered characters, only so many dramatic decisions that can be made in what time's left.