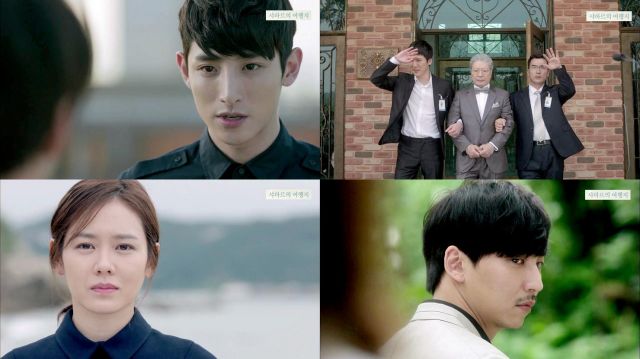 The way this drama has been playing around with convoluted schemes, emotional manipulation, and arrogant taunts, I was sure that the final execution of I-Soo's plan had to be something amazing. In the last episode of "Shark", we instead find out that apparently the only thing required to take down Sang-Deuk and his empire was a well-executed police search. To add insult to injury, this is a search that should have been conducted ten episodes ago- why the police are only bothering just now is completely unclear.

Additionally, most of the essential villainy in this episode is performed by a man who's been a non-entity throughout the drama's run. The only evil thing I can remember him doing was when he almost killed that one guy, but then didn't. And even at the time I wasn't sure who he was. I'm not even positive it's the same person who wrecks I-Soo's plans this episode- I'm just guessing because it would be beyond absurd for this villain to just show up out of nowhere.

The way the character arcs all just fizzle out here is horribly disappointing. There's almost no indication about the vicious person I-Soo had to become in order to enact his revenge scheme. This episode makes it look like he's been working for the police this entire time. The morally grey element has disappeared- the discoveries he made about his father in the previous few episodes are basically irrelevant except to the extent that they set up the one uninspiring plot device that created the last episode's cliffhanger.

Sang-Deuk, too, loses a lot of his mystique because his final plan, rather than being carefully calculated to let him keep everything he wants, is just brutal and inelegant. Granted, given his situation, it makes sense that he would just go for this plan now- except that he could have solved all of his problems a lot sooner if he had just opened with this particular gambit. It actually makes less sense that he could do it now rather than before, considering the people and stakes involved.

In many ways the final episode of "Shark" isn't even a resolution. The villains did not receive proper comeuppance, and I'm not totally sure how most of the cast was supposed to grow as a result of their experiences. It's not clear what happens to I-Soo's organization, Hae-Woo's marriage, or the Gaya Hotel group fortune. I guess that, in the end, they at least solve the mystery. But that was never the most interesting part of the drama anyway. All in all, a rather disappointing end to "Shark".