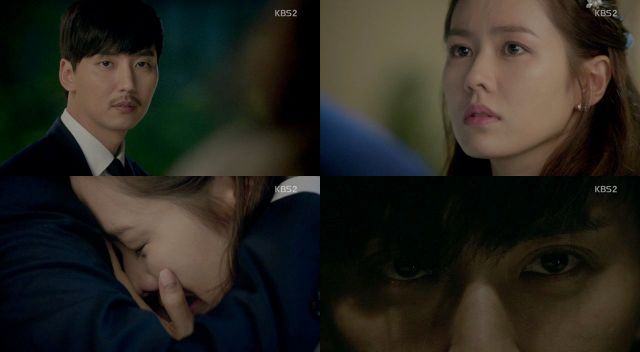 Han I-Soo quickly proves that he's every bit the threatening predator we've seen in the subtler parts of his personality. There are two major thematic elements of the episode. First, I-Soo wastes no time in figuring out exactly what happened to his father, though both he (and the audience) still aren't fully clear on why, exactly, this happened. The how is still all too clear.

The second major point are the implicit threats. Really, nearly everyone in this drama is pretty good about showing hostile body language while still being respectful speech-wise. But teenage I-Soo (played by Yeon Jun-suk) demonstrates scary potential in the way he stands up to people withj actual life experience in these situations. Given that Yeon Jun-suk is not the main character here (just a younger version) I get the impression he's being given very specific direction for how his character is supposed to act.

In this episode we also get our first really good look at the adult I-Soo, both in a tender moment as well as a vicious one. It remains vague what exactly happened to him between the time skip- but it seems like every glance we get at the older I-Soo the less likely it seems that he can be rehabilitated, or even that trying would be a good idea. Like a real shark, he's relatively harmless unless provoked or stimulated somehow, even in his current single-minded state.

This isn't just a function of Kim Nam-gil's performance, either. We get a reasonably good outline of what's happened to Jo Hae-Woo in between the time skip- and so far it seems like her best option should be to forget about him. Now, for obvious dramatic reasons, this can't happen. Hae-Woo is going to be a major force against I-Soo's revenge, if only because he actually likes her. Not in a romantic way, necessarily, but because she's the only character we've seen that's shown serious remorse about their own predatory behavior.

One final element is introduced to the story in this episode that will no doubt prove essential- the force that changed I-Soo. It is malicious, dangerous, and not something anyone wants to be left alone with for any period of time. Scarily, we get the impression that I-Soo knows this just as much as we in the audience do- and genuinely does not care. Pay attention to Kim Nam-gil's devilish smile here- there's a definite inherent joy there that could not have been taught.