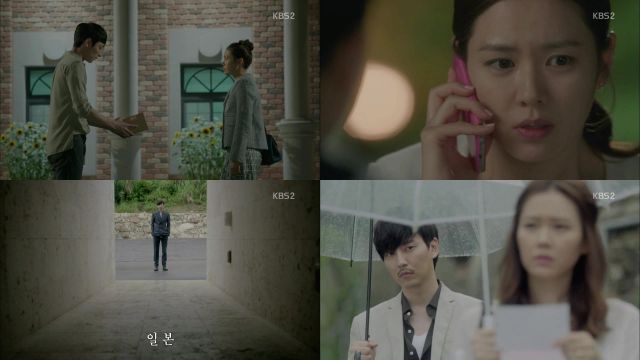 Jae-Woo finally makes a sobering and disturbing realization, explaining her stilted slow walk at the beginning of this episode. This episode again decides to play the last scene first, and let the rest be build-up. It's an ambitious method of narrative storytelling- but neither here, nor in "Shark"s other attempts, have I really felt very moved by it. It sums up a lot of what this show is- a lot of style with questionable substance. It's consistently just interesting enough that the deliberate, complex shooting doesn't come off as pretentious.

That's one big highlight of this episode- the story has moved to Okinawa, for no real reason accept it's a beautiful place to shoot. And I certainly can't argue with that. The sweeping, near tropical majesty of the backgrounds here is impossible to ignore. It feels deliberately inappropriate- like we're supposed to be stuck in the middle of a grand romantic epic instead of a story about delirious revenge.

Which leads to the other big question- why I-Soo is so determined to exact revenge. There's this great shot of him just standing and admiring the scenery, and I couldn't help but wonder why he's even bothering. He lives in beautiful Okinawa, with people who clearly care about and respect him. And yet he never wavers. At every moment, I-Soo clearly has revenge on his mind as he moves through each step of the plan.

Seeing more of I-Soo's relationship with Yeong-Hee and Yoshimura also presents a bit of a dilemma. What we saw last episode indicated mistrust- and yet now they all seem to be on fairly good terms. Superficially, this seems contradictory. However, the parallel with Jae-Woo's (actual) family is unmistakable. Her patriarchs are able to maintain the facade of a happy family life by never engaging on a spontaneous, emotionally honest level. I-Soo knows exactly where he stands with his erstwhile allies- so even when they're being manipulative with each other, on a certain level they expect and respect this as general equals.

In the moment, I never seem quite satisfied with what's going on in "Shark". The plot points seem just a tad bit belaboured. The surprising part is that the themes actually hold up fairly well upon closer examination. The characters are all fairly clearly defined in terms of their general motivation. However, as of yet, no one has had to make any serious make-or-break decisions. When and how this dramatic impetus will finally arrive will likely decide how effective the storytelling in "Shark" really is.