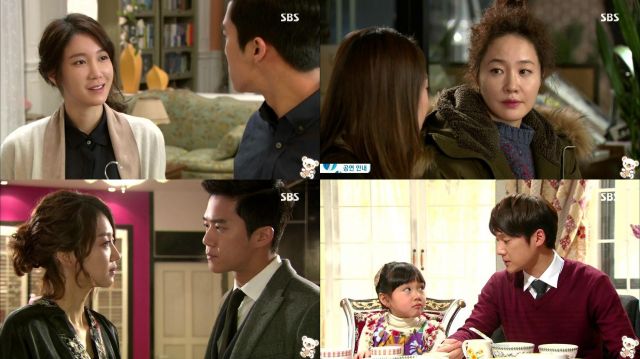 Well, lots of stuff happened this episode. As to what any of this managed to accomplish, well...I'm not really sure. The plotting of the narrative moves at a really glacial place. Pretty much every significant storyline event in the drama is referenced here, including the last episode's cliffhanger, but once all these facts are clearly established, we just get into more of the grind of daily life. Nothing much is really done with these storyline developments except character reactions we probably could have guessed.

None of this is necessarily bad, exactly. It just becomes rather problematic because when the drama does finally get around to important narrative stuff, the plot twists feel like they come out of nowhere because there just hasn't been enough nuanced acting to effectively communicate the character's feelings. I get why Tae-won makes the decision he does this episode, it just feels really weird to see him lashing out at basically the only character who isn't directly aggravating his insecurities.

For every other character it's pretty much just more of the same. Eun-soo still seems to be in her usual precarious emotional state, but she at least does a better job of hiding it now that there's another task for her to do that doesn't relate to her daughter somehow. Lady Choi is mean. This drama's done some interesting things showing her as a basically abusive parent who doesn't realize that her matriarchy is a sadistic one because everyone's too scared to stand up to her. But at this point, there just isn't any depth.

Uhm Ji-won's performance as crabby sister Eun-soo continues to be the high point of this drama- but her scenes are constantly too few and far between. Given that nearly every conflict in "She Gets Married Thrice" is created by characters being too confined by social decorum to actually clearly say what they think, Eun-soo really needs to have a better focus. Again and again she makes a strong argument that some degree of emotional fury is necessary to keep people from getting the wrong idea.

It's weird that Uhm Ji-won is typically listed either as the lead or the second lead in informational materials regarding "She Gets Married Thrice", considering how little work she actually seems to do. At this point I'm not really sure what to think of the drama. It's clear that almost all of the characters need better, more frequent catalysts in order to keep the action exciting, and that it takes way too long for them to pull this off on their own. As to whether the writer and director are going to figure this out, I have no idea.

"[HanCinema's Drama Review] "She Gets Married Thrice" Episode 10"
by HanCinema is licensed under a Creative Commons Attribution-Share Alike 3.0 Unported License.