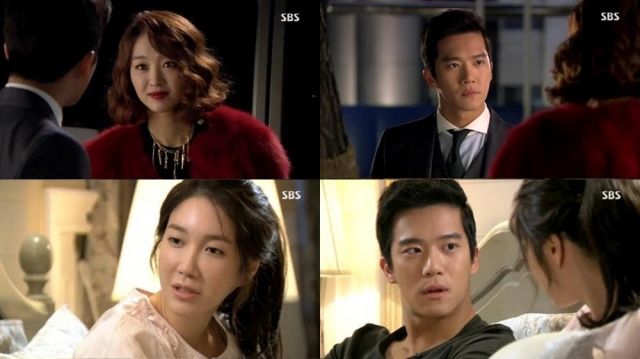 I am genuinely extremely unsure how much of this drama is supposed to take place in the present day versus flashbacks. It's difficult to connect how events and character reactions are supposed to relate from one scene to the next. All I'm positive about is that the scenes in the apartment take place in the present, and feature remarkably little forward progress in the storyline. Characters are generally angry- justifiably maybe, but not in an especially interesting way.

The broader narrative is just too complicated right now to be easily and coherently parsed. There are lots of characters running around with their own motivation and it's difficult to keep track of them. I only barely have an idea who any of the existing people are- it's way too soon to be tossing new romantic entaglements into the mix when there's no context with which to appreciate them.

"She Gets Married Thrice" seems to be trying to make a statement about the nature of deceit in trying to maintain a picturesque scene of love and family, and the efforts characters make to try and keep this appearance up even in the wake of divorce. It's an interesting idea, but trying to deal with deceit on this level requires some sort of baseline. The construction of discrete events is difficult enough to fathom that I'm really not sure whether or not a character is lying even when that information should be plainly obvious.

I'm holding the acting, and by consequence the direction, as the main culprits for these problems. A great deal of nuance is required to accurately get across the proper level of deceit. The lying characters here are just too convincing. This could work if their duplicity was intended to be a dramatic revelation, but it's not. There's a lot of assumed information here that just hasn't been spelled out that well to the audience. The result is a disorienting drama that's frankly difficult to watch. The bad things that happen are less coherent results of prior events as they are confusing histrionics.

Maybe that's because this drama is supposed to be about exaggerated emotional reactions, but I'm really not at all sure. Everything about this production is so scattershot that it's just really difficult to tell. Just thinking about it gives me a headache. There's too many basic questions here that aren't being answered. How do the characters on the outside view the ongoing situation? How have events in the past influenced those in the present? Who's supposed to love who, and why? I can't make any sense of it, and nothing about this drama's general production qualities are strong enough to make me want to try harder.

"[HanCinema's Drama Review] "She Gets Married Thrice" Episode 2"
by HanCinema is licensed under a Creative Commons Attribution-Share Alike 3.0 Unported License.