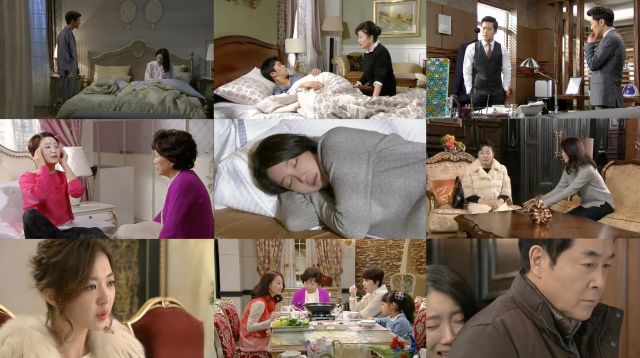 It would seem that Eun-soo has found yet another largely ineffective way of dealing with her problems- making no effort to emote at all. I'd find this latest development depressing except that it's just what we have to expect from these characters at this point. The ending in particular is a strong statement on the direction Eun-soo seems to keep moving in life. The poor woman's just running around in circles, accomplishing nothing, incapable of really opening up to anyone aside from family.

There's other sweet family moments, too. Tae-hee takes Seul-gi to her dancing lesson. Granted the reason for this isn't exactly great, but it's just another solid reminder that Tae-hee is already Seul-gi's stepmother in every meaningful way. She's a good aunt who's always looking out for her niece's interests and paying close attention to what Seul-gi wants, instead of what she wants Seul-gi to do. Tae-hee is the only person in the household aside from Tae-won who actually knows how to deal with the little girl.

In more unsettling news, someone finally confronts Da-mi in a way the woman can't easily brush off. But the entire argument presented, while convincing, is also deeply unsettling. The same argumentative points could just as easily be applied to the currently teetering marriages we've had to endure watching for so long. There's just this overall sense that everything needs to end, better sooner than later really.

All in all this is another strong episode, with a lot of forward plot movement. It's probably worth noting, though, that this drama is kind of long, and it feels in retrospect that the storylines have been stretched out just so that we could finally arrive to these major storyline events just now. Still, "She Gets Married Thrice" has always been a story about people showing patience in situations that absolutely do not merit it. So to that extent, the length is at least justifiable even if it's not always pleasant.

"[HanCinema's Drama Review] "She Gets Married Thrice" Episode 30"
by HanCinema is licensed under a Creative Commons Attribution-Share Alike 3.0 Unported License.