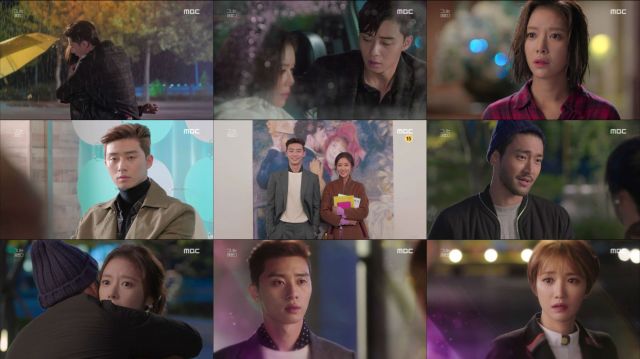 Hye-jin is in a very dour mood this episode. The reason actually is not because Seong-joon appears to have up and declared his love for, although that's definitely a contributing factor. The real issue is that Hye-jin has abruptly realized that her attempt to retain the nostalgic cluster of their childhood romance has failed rather miserably. For all Hye-jin's promises to put an end to this charade once and for all and leave Seong-joon's life, there's always one more excuse preventing her from making a clean break.

The same is true of Ha-ri- who by the end of the episode faces similar consequences for her stalling. So the tone overall is a relatively miserable one. "She Was Pretty" never really overindulges in the sadness, though, because there are too many distracting good times. There's the Renoir exhibition (which is unfortunately not real as far as I can tell), and the whole incident with the ties. That, is true happiness for someone who's genuinely into customer service.

And of course there's Hyeok. It quickly becomes clear that Hyeok's appearance at the last episode's cliffhanger with so much else was going on was no mere coincidence. Hyeok, of course, does his best to prevent anyone from catching onto this fact. Then, when he finally fails, Hyeok continues to milk the situation for every possible advantage while Hye-jin refuses to display the skepticism which really should be a habit by now.

As far as what Seong-joon wants, well, now that he's finally let himself out emotionally the man actually seems to be in a much steadier mood. Unfortunately we're not able to get a good idea what his new motivation is because Hye-jin keeps preventing Seong-joon from talking to her. This can be funny at times. But there's also a sort of tediousness involved in the story not being allowed to move forward.

Of course, the same could be written of most of the drama up until now. There's been very little plot progression since the early episodes, but a lot of charm. While I wouldn't say that the charm has worn off quite yet, this is definitely one of the weaker overall episodes because so much of the emotional emphasis is on the weak points. Even so, I'm curious where the conflict can go from here since, at the very least, the only concievable obstacle at this point is how upset Seong-joon is by the abstract concept of lying.

"[HanCinema's Drama Review] "She Was Pretty" Episode 10"
by HanCinema is licensed under a Creative Commons Attribution-Share Alike 3.0 Unported License.