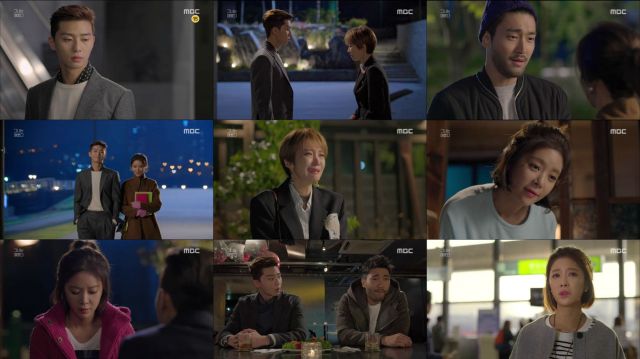 Once the initial confrontation is resolved, "She Was Pretty" quickly closes into dreamlike mode as the real Hye-jin is able to meet Seong-joon on equal terms for the first time since childhood. This sequence begs all sorts of questions- if the reencounter is this magical, with fluid atmosphere, warm fuzzy feelings, and little heart lights everywhere, why did Hye-jin want to put it off so badly? What was she scared of? If she and Seong-joon had such a genuine connection, isn't it obvious that this would shine through, whatever Hye-jin's face looked like in the present day?

Actually, there are subtler problems right below the surface. We still don't know what happened to Seong-joon. Yes, there are moments where he is that sweet little boy. And then there are other moments where Seong-joon turns outright vicious when he doesn't get what he wants. Something worth noting is that Seong-joon doesn't really have any friends, and he subsequently can't really seem to process that Hye-jin might have other people in her life to worry about aside from him.

Like Ha-ri. What Ha-ri did was selfish and short-sighted, but at the same time it's easy to see why she did it. A brief flirtation with her old lifestyle demonstrate how Seong-joon (in sweet little boy mode) is everything that Ha-ri's other boyfriends are not. And this isn't because Ha-ri is attracted to terrible guys or anything like that. Ha-ri's just so used to dealing with men on a shallow level that she's never known an alternative.

All Ha-ri really has is her relationship with Hye-jin a relationship which Ha-ri feels she has unforgivably betrayed. It's easy to feel sorry for her, but by the end of the episode Hye-jin is the one we're really worried about because friendship is a two-way street. Hye-jin needs Ha-ri just like Ha-ri needs Hye-jin, and it's increasingly obvious that Hye-jin seriously erred in involving Ha-ri in all this Seong-joon drama in the first place. Everyone has just been given such unwinnable options.

The overall conflict in "She Was Pretty" has taken an intriguing turn away from romance and more to general questions of friendship. To people like Seong-joon, Ha-ri, and even Hyeok, a lack of social relationships is such that they find themselves easily able to move from place to place without severing too many emotional attachments. But what does this mean for Hye-jin- a woman who values their companionship, yet who values constancy too much to make these kinds of major life decisions on a lark? It took several episodes just for Hye-jin just to try wearing make-up.

"[HanCinema's Drama Review] "She Was Pretty" Episode 11"
by HanCinema is licensed under a Creative Commons Attribution-Share Alike 3.0 Unported License.