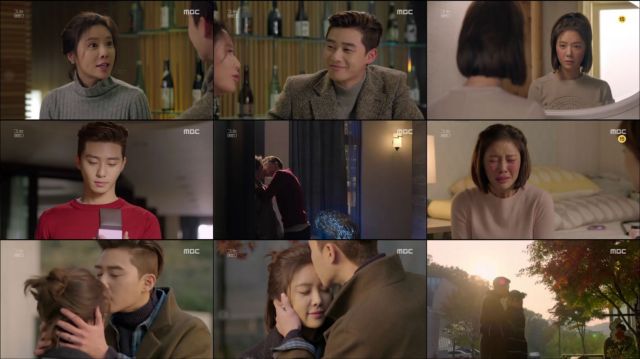 I never noticed before how Hyeok kind of acts like a criminal mastermind. Just listen to the way he outlines to Seong-joon all the clues that have been scattered along the way. At any moment Hyeok is ready to just bust out with bwa ha ha, it was me all along you fools! Except that Hyeok isn't actually a villain and his secret identity is only a plot point that was brought up to solve the mostly arbitrary conflict regarding the threat to Most.

It's mostly a credit Choi Si-won's performance, really. He just puts such ridiculous energy into the role, and that's why Hyeok has always been a consistent highlight in "She Was Pretty". This episode gives Hyeok the proper send-off he deserves. Well, more than that really because Hyeok was always just the fun guy around the office. He was never really essential, the guy just offered a lot of energy. But that's the guy you want in your office just to keep things interesting.

One irony of all this is that I realized rather abruptly during Hyeok's Skype conversation that this Skype conversation alone has told us more about Hyeok's living situation in the United States than we ever found out about Seong-joon. That much is weird because Seong-joon has always seemed genuinely mentally scarred in some way, and rather than explore this plot point, writer Jo Seong-hee just keeps aggressively scripting more cute filler.

By the time we got to the ending I was genuinely confused about whether or not this was the last episode, because it certainly feels like one. No preview, no apparent conflict, just Hye-jin gleefully riding off into the sunrise, with every possibly character completely happy about where they've left off. Exactly how many more cute moments can Hye-jin and Seong-joon even do at this point anymore? Does the production team really think they can just have Hye-jin stutter through every scene and it's never going to get old?

...Well, to be entirely honest yes, they probably could do that. Hwang Jung-eum really does sell the whole adorable awkwardness persona quite well. To be entirely honest it's the only part of her performance in "She Was Pretty" that's all that good, but given that this is by far the most important aspect of Hye-jin's character, that's the only part Hwang Jung-eum needed to nail in the first place. Even if the latter part of "She Was Pretty" hasn't been quite as ambitious as the former, the production team certainly knows how to stick to its strengths.

"[HanCinema's Drama Review] "She Was Pretty" Episode 15"
by HanCinema is licensed under a Creative Commons Attribution-Share Alike 3.0 Unported License.