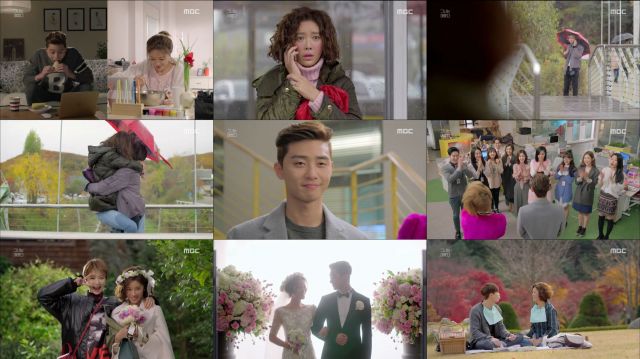 Don't let the brief illusion of conflict a few months into Hye-jin and Seong-joon's separation fool you. Through and through, the finale of "She Was Pretty" is just more sickening cuteness. The drama has kind of turned into candy. It's delicious to consume but after a certain point I just worry that it's going to make me sick. So it's fortunate that the drama is over, and that it saves the cutest possible moment of all for the last scene.

So there isn't that much to analyze here. Although there hasn't been for quite some time. What we end up with instead is last-minute romantic relationships for everyone. OK, not everyone. Hyeok is just chilling out on his own not doing much of anything except tell bad jokes. Although really, his entire character is hilarious. I can't process the idea of a novelist so ridiculously famous that he can be recognized on sight by people from other countries, mostly because novelists aren't generally supposed to seen.

And hey, what's the deal with those big red spots on Hye-jin's cheeks? Are they genetic or does she get them by applying some sort of weird makeup? Those things have always bugged me, even if they are cute. Hye-jin's character design in general has been fluctuating a lot lately, like the makeup department can't decide how far they want to go with glamorous or frumpy in any given scene, and just keep compromising on the point.

That's what "She Was Pretty" has been like in general lately. There hasn't been any obvious point except for us to just root for Hye-jin and Seong-joon to get together, even though there hasn't actually been any obstacle for them to compete against for some time now. This would be annoying if not for the fact that they're just so gosh-darned cute. Go ahead, try to watch the Skype scenes without rolling your eyes. I dare you.

I suppose in that sense "She Was Pretty" has definitely been effective wish fulfillment. In fact "She Was Pretty" has gotten nearly everything about the romantic comedy genre down pretty pat. It has appealing characters, down-to-earth social commentary, engaging subplots, and always with the endless endless cute...the main criticism I can lob against this drama is that it has been so good at what it does, while also becoming very conservative with writer Jo Seong-hee completely unwilling to do anything to screw up the flow. So, definitely good, definitely not terrible, probably not great. I guess I can live with that.

"[HanCinema's Drama Review] "She Was Pretty" Episode 16 - Final"
by HanCinema is licensed under a Creative Commons Attribution-Share Alike 3.0 Unported License.