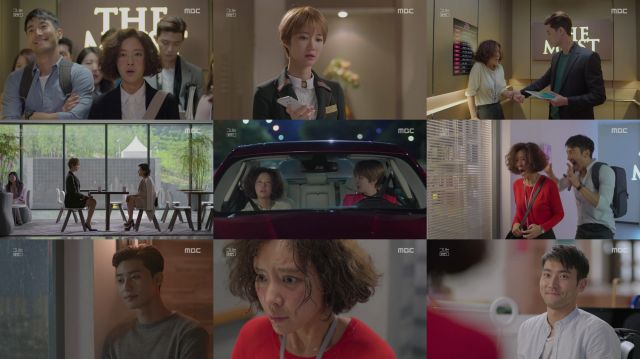 Seong-joon (played Park Seo-joon) is Hye-jin's first love. In the past Seong-joon was fat and generally unlovable. In the present day, though, Seong-joon is mainly a cipher. There are frequent subtle hints that Seong-joon was influenced for the better by Hye-jin- that she taught Seong-joon how to calm himself down and have confidence in himself. Then there are more confusing moments where Seong-joon appears to have taken this advice as a license to act like a total jerk.

For awhile it's difficult to interpret Seong-joon's actions properly because Hye-jin acts like such a complete scatterbrain. While the first episode made Hye-jin seem decently sympathetic, after a certain point her presence does get to be an inconvenience. The main issue is that Hye-jin way, way overestimates the extent to which anyone at the fashion office actually cares about who Hye-jin is. If the difficulty with which Hye-jin can lose this job is going to be a plot point, it would help if Hye-jin actually seemed a bit more competent.

Bear in mind that overall general obliviousness appears to be shaping up as a pretty important plot point. Note that what we're seeing of Seong-joon right now is pure. Seong-joon isn't playing any complicated games for the sake of achieving a mostly impossible long-term goal. He's mean at work because that's what it takes to get the job done. Seong-joon can be kind on an individual level or reflective when by himself. But whatever Seong-joon is at any given moment, that's who he is in daily life.

What does that mean in broader perspective..? I'm not sure yet. The cliffhanger makes it look like a major layer of the subterfuge is going to fall apart. And that much is a good sign because I don't think "She Was Pretty" can properly function if Hye-jin is the only character engaging in elaborate deceptions. The sympathy of her character is at risk right now, mostly because Hye-jin has dedicated a lot of energy to trying to avoid the plot. This is annoying since we know she can't possibly succeed.

I'm feeling cooler on "She Was Pretty" now mainly because there doesn't seem to be that much to the drama yet except concept. There's characterization, but not motivation. Why is Seong-joon so determined to succeed in fashion? If Hye-jin has finally admitted that she doesn't want to let this first love story die out, what is she hoping for instead? These basic questions need to be answered in order to give "She Was Pretty" a proper sense of urgency.

"[HanCinema's Drama Review] "She Was Pretty" Episode 2"
by HanCinema is licensed under a Creative Commons Attribution-Share Alike 3.0 Unported License.