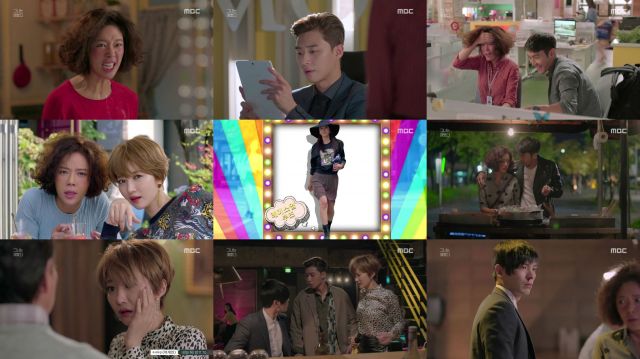 Ha-ri is one of the stranger contradictions in the drama. She acts like the main character even though that role is actually filled by Hye-jin- although neither Ha-ri nor Hye-jin are aware of this. Beyond that, though, Go Joon-hee puts in a surprisingly compelling performance. Just look at her squirming around, trying to think of the best way to resolve the Seong-joon situation in a way that meets Hye-jin's rather eccentric specifications rather than just dumping the guy.

It's an especially interesting contradiction when we consider that Ha-ri's love life is, well, not exactly based on principles of mutual respect. Because Ha-ri has been told this charming story of first love by Hye-jin, her attitude has changed. In this respect Hye-jin's influence on Ha-ri too has clearly been for the better. We get to see a bit of Ha-ri's family and sure enough, they seem pretty responsible for the more disappointing parts of Ha-ri's personality.

Then there's Seong-joon, who's so completely bowled over by nostalgia land that he doesn't even bother putting in the effort to make a pass at Ha-ri. He really does just want to talk. And this is no mean accomplishment given what we see of Seong-joon absent the drama's other characters. Note the book end of the cafe meetings. Seong-joon is just as oblivious to the contradiction in his personality as Ha-ri is, and has yet to grasp that his character needs to grow on his own terms. This makes him oddly compelling.

All the characters in "She Was Pretty" are generally decent people. What they're not so good at is navigating the differences between the face they put on to different people in different contexts- the elaborate deception regarding Hye-jin's true identity is the most obvious manifestation of that, but nearly every scene does excellent work commenting on the interplay between these internal conflicts. Which incidentally, also leads to funny jokes.

It also gives subtle but essential relevance to Hyeok (played by Choi Si-won). He's the only person who acts mostly the same in every given situation. He just reacts in the way most likely to give people a rise, making sure they know full well that he wants them to overreact, so they make an effort not to do so. Even if his character lacks much plot relevancy just yet, it's a good showcase for how the performances in this drama are able to elevate the material, because there really ia a genuinely wide gamut of personalities playing off each other here.

"[HanCinema's Drama Review] "She Was Pretty" Episode 3"
by HanCinema is licensed under a Creative Commons Attribution-Share Alike 3.0 Unported License.