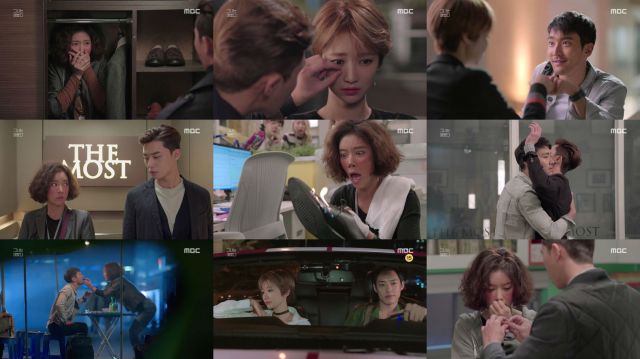 We've got the usual hijinx here of Hye-jin fumbling around Seong-joon, trying to keep stupid secrets, and the symbolism for how this relates to the biggest secret of them all is pretty difficult to ignore. Ditto with Ha-ri- the bit with the shoes practically hits us over the head with how yeah, this is a metaphor for the stupid choices Ha-ri is always making, even when explicitly warned. The tendency of these plot points to be so recurring can, at times, be a tad repitive, and that's the main flaw of "She Was Pretty".

The funny thing is I find myself actually not minding all that much. The characters maintain their basic appeal. Park Seo-joon continues to really nail the essential factor of Seong-joon's deadpan. It's endlessly fascinating how Seong-joon can sometimes be such a jerk, yet also be really cute, while expressing the exact same emotion. It's always a matter of context with him and by pure chance Hye-jin and Ha-ri are facing opposite ends of that.

Seong-joon's split personality oddly makes him a better match for Ha-ri rather than Hye-jin, because Ha-ri suffers from the same dilemma he does. She's a sad adult who's able to distract herself with creature comforts but who ultimarely retreats to her identity as defined by Hye-jin in order to meaningfully boost her self-esteem. We don't see quite as much of Ha-ri in jerk mode. Even so, it's made clear that she's not a fun person to date- as herself anyway. Ha-ri as Hye-jin is perfectly palatable.

Contrast Hye-jin and Hyeok. They always maintain a consistent outlook even in wildly different circumstances. Naturally, Hye-jin is hiding a huge secret, and it's fairly obvious that Hyeok is doing the same. Even so, both characters have a very gravitating presence precisely because they look out for other people and don't care if they look ridiculous while doing the right thing. Hye-jin just seems like she gets the worst of it because she's willing to express more negative emotions.

There are all sorts of interesting angles to look at the characters through here. To what extent are they ciphers? For each other, or for who they want to be? Do any of them really know what they want, or are they just faking it based on long ago childhood expectations that can't even be remembered? It's this analytical element that makes me fairly forgiving of the rather slow pacing in "She Was Pretty"- although hopefully the cliffhanger will be a step in a more dynamic plot direction.

"[HanCinema's Drama Review] "She Was Pretty" Episode 5"
by HanCinema is licensed under a Creative Commons Attribution-Share Alike 3.0 Unported License.