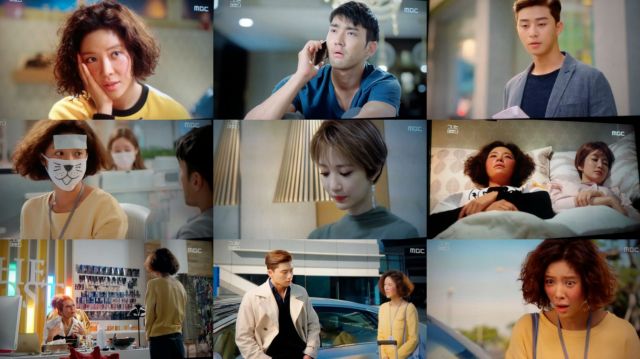 The opening portion of this episode is mostly a competition to see who can show the most love to Seong-joon. As usual the comparative analysis is, well, pretty obvious. Hye-jin does the best that she can within reason. Ha-ri doesn't do a very good job because she's just pretending to be a kind person when she isn't really. And Hyeok just...well, you ask for help from Hyeok, there's not really any guarantee that he's going to do it correctly. To Hyeok the right way is the fun way- no exceptions.

But Hyeon isn't all fun and games. This episode he does manage to eventually give some bad advice that's well-suited for his devil-may-care style while being pretty much completely inappropriate in the context of the whole "pretend to be someone you're not in front of Seong-joon" hijinx that characterize the greater plot of "She Was Pretty". I rather enjoy that Hyeok is quite literally a meddler- outside of Choi Si-won's performance Hyeok barely has any business being in the story at all. He's just the guy that asks questions.

The main commonality regarding Hyeok's questions is that they're designed to ruffle feathers. As absurd as the apartment scene is, as well as Hyeok's bizarre insistence on hounding Seong-joon over the subject, he's just going for the discomfort. For Hyeok this is just a game. For the other characters the situation is quite a bit more messy, and they don't embrace Hyeok's attitude for good reason. It probably just wouldn't work for them.

Take Ha-ri. She undergoes genuine moral conflict here trying to figure out the right balance between following her heart and betraying Hye-jin. There is, of course, no actual balance to strike. Ha-ri's behavior is selfish and unsustainable, and she is actively resisting any revelations that might force her to realize that. Ha-ri veers dangerously close to becoming an unlikable person- passivity and reluctance are the main factors giving her moral ambiguity.

As for Hye-jin, well, she never really changes that much. Which is weird, considering that Hye-jin is the main character, although I suppose that does fit in with her greater worldview. Great stories don't happen to women like Hye-jin because Hye-jin's temperament is not well-suited to dramatic arcs- just wacky comic adventures. As of yet, I'm still not tired of these comic adventures. At minimum they warrant a smile, though I'm not sure how long that will last.

"[HanCinema's Drama Review] "She Was Pretty" Episode 6"
by HanCinema is licensed under a Creative Commons Attribution-Share Alike 3.0 Unported License.