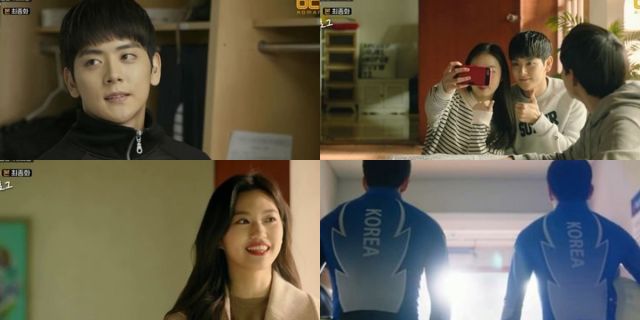 As expected, the remainder of what little plot "Short" has wraps up fairly predictably. Ho-yeong and Eun-ho realize that, even if they sort of hate each other, almost all of their friends are mutual, so they really need to keep their squabbling limited to just trying to outdo each other on the ice. Everyone agrees to just help each other out, in whatever goals they have. The happy ending is not one of accomplishment so much as it is of promise.

Nothing else happens. No really, I'm struggling to think of something, anything that could really be called a story arc for any character that was resolved here, nothing comes to mind. The characters in "Short" all had very one-dimensional goals, and they only ever tried to achieve these goals through training montage sequences. And there's a reason why training scenes are usually montages- they tend to be pretty boring, so we want to get through them quickly.

I did like Ji-na's audition though. We (and the characters) were pretty primed at that point to expect a showstopping performance- but then Ji-na proceeds to underwhelm. It wasn't really her fault. Ji-na's talent really does rely more in the dancing aspect of K-Pop than it does the singing. Which is why it's kind of odd that a K-Pop competition would consist only of singing, and not dancing at all. This must be why scouts search out talent in the street instead of at contests.

And there's also that adorable scene where Ho-yeong asks Ji-na to go out with him only if he makes the national team. It genuinely does not occur to Ho-yeong that whether Ji-na likes him enough to go out with him does not hinge on his being successful. I mean sure, she probably wouldn't be attracted to Ho-yeong if he was just a lazy bum with no ambition, but Ho-yeong has always had motivation beyond that, however petty.

Bear in mind that this scene is so short I just spent more time describing what happens than it actually took for director Kim Yeong-min-II to actually show it to us. Even when taking into account that "Short" is only four episodes long, I'm surprised at just how little plot there is. Snip away a few plot threads and the entire story could have taken place in a single episode, or two at the very most.