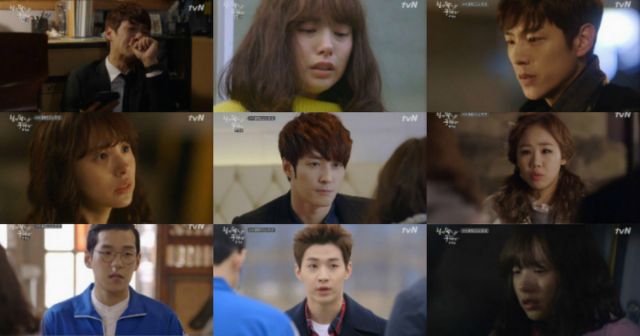 Apparently the first two episodes were just a prologue- the plot actually starts now, as He-ra tries to fulfill Se-chan's last wishes and bring the band back together. Note that the main important storyline point the drama needed to establish for this to work was just to show the six lead characters being buddies, but up until this episode they've barely even shared any screen time. Well, whatever. I'm mostly just relieved that "Sing Again, Hera Gu" has stopped with the excessive melodrama.

Instead, it's jokes again! Yay! At first Scarlett (played by Kim Min-ji), just seemed like yet another unnecessary annoying character, but here I've come to appreciate her very specific brand of annoyingness. Not even necessarily a bad person, just prone to throwing temper tantrums because no one tells her not to. The way Kim Min-ji does obnoxious random English also struck a chord in my heart. How relieving it is to know that Koreans also dislike that speaking habit!

For the main cast, we get some essential character motivation. It's not especially deep or anything, but it's well in-keeping for a drama mostly concerned with the love of music, as well as the occasional joke. The jokes aren't even necessarily well-written or executed- honestly they're pretty goofy. But that's where it's easy to take advantage of a strong cast. Even if the set-up to a joke makes no sense, a good comedian can at least sell it.

Take the cameo appearance by Sam Hammington. He almost never speaks English even though it's his native language, and here we see why. Inexplicably he's a much better actor when speaking Korean. This is a goofy, obviously unintentional meta-joke, but it's still funny. Similarly, if "Sing Again, Hera Gu" wants to contrive excuses to show off how many languages Henry can speak, that's fine by me. Just keep that story moving forward with a song every so often.

While none of the music here has quite the dynamic energy of the first two episodes, this is also well-integrated into the overall story arc of these characters actually becoming a serious team that's to be managed by Tae-poong into super stardom. They can't really be that good yet, except through the power of imagination. And also contrived switched-at-birth plotlines. But you know, as long as "Sing Again, Hera Gu" actually focuses on making He-ra sing rather than cry, I've got a pretty high tolerance for ridiculous story hooks.