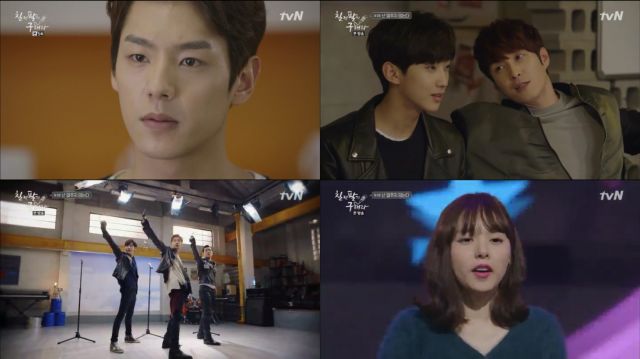 The viewers have spoken, so "Sing Again, Hera Gu" gives them what they really want- more fabulous shots featuring the manly chest of Shim Hyung-tak. I find it kind of hard to believe that the two directors are male. But maybe that was just the main point of discussion at the last meeting. Jeong Soo-hyeon and Sin Myeong-jin going no, no, no. The whole reason we wrote the shirtless scene was so that everyone could get a good long look at his chest and you did it wrong. If Shim Hyung-tak himself had any objection to this it was well-hidden. The man's performance is as jovially seriously ridiculous as ever.

Oh right and I guess there's songs too. Tae-poong comes up with a scheme to at least get his group a word in edgewise on the popular music scene. For awhile it's fun times as everyone just discusses what kind of song they should, using as evidence for their points actual musical performances that probably took too long to choreograph. But who cares, if you're watching this drama it's presumably for the music, not the serious stuff.

Although for what it's worth the serious stuff here is fairly decent. The conflict is actually in mostly relatable territory- politics. Yes, we all know that the music industry has a political problem and that it's the people on the lower rungs who really need the help that end up getting muscled out by the ones with more powerful political backers. Blasted music industry- only caring about money. Ignore for the moment that this drama is being produced by Mnet.

But even so I liked the general pokes at celebrity culture, like the entire scam involving the photographs. Now every time I hear about one of those scandals I'm just going to wonder if they really are just friends and the whole thing was just some sort of elaborate staged event intended to garner headlines. Oh who am I kidding. Most of them probably are. That's just what gossips news is.

Hey, if Mnet gets to be hypocritical, I do too. That's what helping "Sing Again, Hera Gu" hit a really good note right now. It really doesn't matter whether the drama's general thrust is true so long as it's believable. The story's decently plausible enough that I can just go along with the music and the general silly jokes- which you may recall are the main selling points of the drama in the first place. I'm mildly apprehensive about the cliffhanger, which quickly jumps from happy ending to potential obnoxious melodrama. Even so, for the moment I'm fairly optimistic.