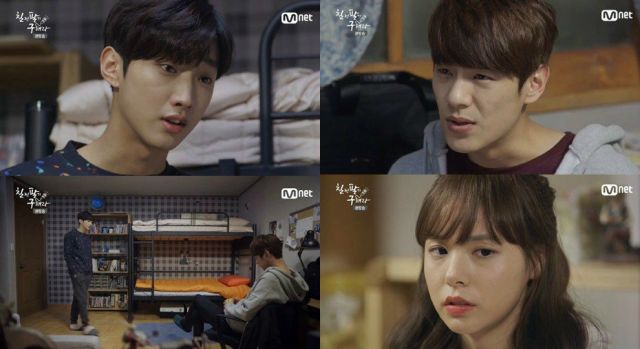 The direction in "Sing Again, Hera Gu" makes the drama look like a music video. That's not necessarily an insult, it's just that realizing this helps me to understand somewhat why the plot frequently takes such radical terms. In music videos, no one really cares about situations being overly melodramatic because they're so short. Car crashes, lovelorn crooning, secret conspiracies- heck, most music videos only even have vague verbal references to their "story" at all, relying mostly on visuals. So why should an Mnet drama be any different?

Be that as it may, there is actually a mostly cogent plot here. The band's plans are scuttled by by some sort of espionage that could only have possibly have come from someone with inside information. The characters grapple with the prospect that they've been betrayed again. Two obvious supects present themselves, but let's be honest here. Having only finally just gotten the band together again, is "Sing Again, Hera Gu" really so mean-spirited as to tear them apart before we even get to see a six-person music number?

...Well, to be honest I wouldn't bet against that actually. Even so, the drama itself has relatively little interest in the fairly standard mystery plot as much more focus is put on lovelines. The funny, the tragic, and the undercard. Shim Hyung-tak continues to be way funnier than possibly seems reasonable. Even in fantasy sequences the man puts on such a serious deadpan look that I can't shake the feeling that maybe it really is him this time.

As for the other two, well, like I mentioned before, it's better to think of "Sing Again, Hera Gu" in terms of the depth of a music video rather than something more impressive. The cliffhanger is frankly a little silly, and could be easily cleared up by a single conversation. Which of course the characters aren't going to do because all of the emotional misunderstandings are pretty much required by contract to linger on indefinitely.

But the little moments, the ones that are easy to relate to on a personal level, those are the ones I really like. For all the iffy issues on the production end "Sing Again, Hera Gu" has always had a very good cast and the jokes are pretty consistently on-point. Overall the episode suffers somewhat from a general lack of Scarlett- the only villainous character who exercises any real comedic timing. Still, I'd say this was a passably enjoyable experience.