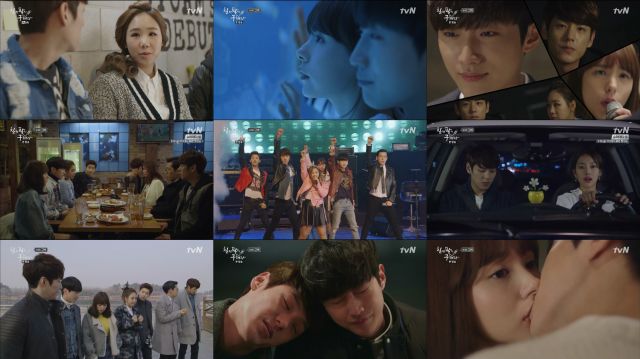 Well I'll be darned. "Sing Again, Hera Gu" is one of the last dramas I'd expect to have a coherent, self-contained philosophical thread over the course of a single episode and yet here we are. Kudos to the production team- the theme here is confession, specifically of the romantic variety. Nearly every single character gets entangled in one of these somehow, and as the ending helpfully notes, what determines success or failure in this context isn't necessarily genuineness, but rather timing.

As far as genuineness goes, though, "Sing Again, Hera Gu" makes the surprising argument here that true heartfelt emotion is actually even more important to musical duets than chemistry. Woo-ri's choice of partner at first seems inexplicable, and indeed, even creates some problems at the publicity level, but these two working together know exactly how to run a sad ballad because they both know what it's like to be frustrated and upset emotionally. More importantly, though, they haven't caused each other problems on that end, so it's easy enough to cooperate.

The performance is quite a contrast to the follow-up- a zippy number where everyone is able to act like best buds. And indeed, note that for all the general frustrations regarding love confessions that we see here, the team never has any actual trouble working together. It's like Hera says, really. The name of their game is literally perseverance. The dreams are bigger than the lovelines, even if the lovelines are what's driving them to the liquor.

I'm also impressed at how touching the expressions of unrequited love are here. Even Scarlett manages to come off mostly sympathetic. It really is just a matter of fine-tuning the aggressiveness required to pursue a romantic partner with the soft warmth necessary to get them to actually like you. But because no one knows what's going on with anyone else, frequently one confession accidentally manages to interrupt or sabotage another. And that's no fun at all.

In the end it looks like, for the foreseeable future at least, only one of the confessions has been accepted. And I really am curious where the drama's going to go from here. Is everybody just going to give up on romance now? I'm guessing not, but it seems like everyone's struggled too much at this point to let matters of amour ruin everything. Besides, as Woo-ri demonstrates, emotional pain can itself promote better art. It's obvious the team is going to have fight for every inch of success they get from here on out, so in the performance department they're going to need all the help they can get.