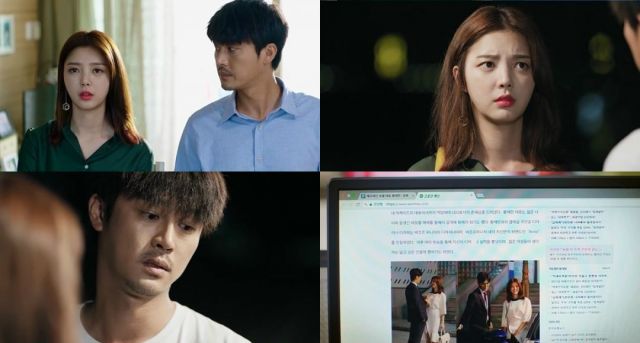 So "Single Wife" ends up concluding the logical direction it took with the previous episode that barely touched on the main conflict at all, and brings upon a final glorious comeuppance against In-hwa. I remain baffled just as much as I did last time as to what exactly happened to the premise. We had certainly received hints that In-hwa was a corporate vulture, but those barely even registered as a subplot. Now Hyo-rim and some bald guy I'm not even sure has a name have to work together to bring her dad back to stop her.

In a way it's actually pretty fitting how Ra-hee only just barely has anything to do with this storyline. It's like I've mentioned repeatedly- we've never seen Ra-hee stick her neck out for anyone or do much of anything substantial. Ra-hee doesn't even really act in her own best interests most of the time. Again, this is how Ra-hee is in the position of being an accidental bigamist in the first place. She just trusted that Min-hong would finish the divorce process for her.

This also creates the hilarious implication, when Ra-hee fails to show up to get the divorce finalized again, that she really is just a complete scatterbrain who can't be trusted to follow through on anything. I felt bad for Min-hong less because I wanted him to be happy with Ra-hee and more because he had become emotionally attached to a completely emotionally unreliable woman. Min-hong was, for most of "Single Wife", a man without options.

Which leads us again to the weird situation that it's Jae-min and Hyo-rim who get the genuinely affective emotional scenes regarding their familial issues. Their father, who is at the center of this conflict, is not a character we ever actually knew very much about, so we're just left to assume that he was a good dad and that this family will pick up the pieces and move on with life. Certainly Jae-min, protests to the contrary, appears to have moved on from Ra-hee.

I didn't especially want to finish "Single Wife" when circumstances beyond my control made it impossible. And now, having gone through with finishing the drama, I will admit that this was not the ending I was expecting. It was unsatisfying, but in the sense that I was reminded that there were some interesting story elements that were largely left unexplored for the sake of obnoxious situation comedy. I guess that's better than the drama having no redeemable qualities whatsoever.