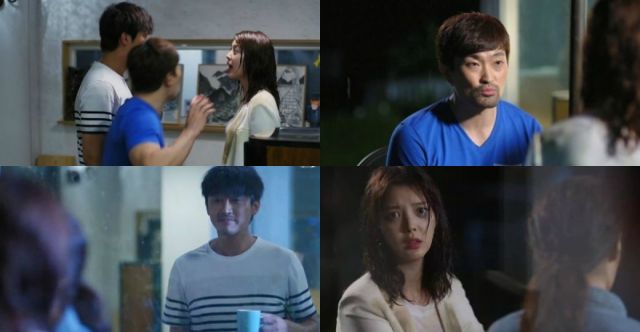 Now that we know who Ra-hee and Min-hong are in a vacuum, it's time to piece together how exactly their relationship fell apart in such a specific way that her attempting to remarry is such a big problem. Min-hong doesn't just want to hold on to Ra-hee. He genuinely doesn't seem to understand that they broke up at all. And in all fairness, the flashbacks we get don't really come off as total dealbreakers. They do tend to make Ra-hee look selfish, which is why she's so uncomfortable having them.

But then discomfort is the main central aspect of Ra-hee's character regardless of whether or not Min-hong is in the room. This gives the impression that Ra-hee is impossible to satisfy. The implications for Ra-hee's relationship with Jae-min are rather ominous. Min-hong and Ra-hee always cross right away to each other and say what they mean, even if it starts a fight. It's hard to visualize Ra-hee and Jae-min talking to each other the same way.

Lest this make "Single Wife" sound too serious, rest assured that the drama is a comedy through and through. The obvious low brow humor of certain situations notwithstanding, it's hard to escape those extremely goofy musical chords every time Ra-hee and Min-hong have a mild argument about something very silly. Uhm Hyun-kyung is very funny when flustered, and Sung Hyuk is wise to simply let her have the comedic field to herself while acting as a straight man.

Elsewhere we are introduced to Hyo-rim (played by Yuna) who is also effective in broad strokes. She's very conceited, mostly, although not in an especially flamboyant way. Hyo-rim is entitled, and an almost perfect mix of annoying and clueless. The mix is very difficult to manage but nonetheless, Yuna is up to the task. We and her new colleagues are are left wondering whether she will be worth the trouble. Hyo-rim's main problem is that she's a bad cultural fit rather than some more explicit defect.

So far "The Single Wife" is hitting all the right beats. The characters are charming, yet obviously flawed. They have funny jokes. And there's also a seriousness to married life that makes it easy to forgive some of the drama's more obviously clichéd plotting. Even the fast-moving truck, the ever present hidden villain of South Korean dramas, turns out to not be what it seems, as the characters are what drives the plot, not the melodrama.