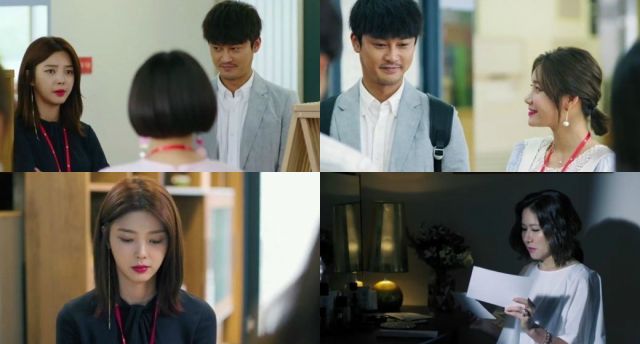 So now Min-hong is working at Ra-hee's company. So, technically, all the main characters in "Single Wife" are now working at the same company. It's a good thing we get to see Min-hong's portfolio right away because in spite of this fact, no one at this company ever seems to do any actual work. Far from working, all we really see anyone doing is having concluding work dinners once work is finished.

This is, I admit, a fairly minor issue to harp on. I can think of plenty of dramas where it made zero difference what the main characters did for work. I can also think of some where discussion of work definitely lowered the overall quality of the drama, as it was clear the writer didn't have the slightest idea how the probably arbitrarily chosen profession of the lead characters actually works in practice.

But I can also think of dramas where the kind of work the main characters did added some badly needed flavor to an otherwise fairly bland production, and that's where I am with "Single Wife" right now. We're at about the creative limit of "Ra-hee uses information of their past lives together to make Min-hong miserable" jokes. Absent any other particularly interesting driving force in Ra-hee"s life (like, say, why she likes furniture design so much), the woman comes off as mean-spirited and not much else, especially in the face of flashbacks.

For what it's worth, flashbacks do add needed dimensions elsewhere. In-hwa has always been presented as a mother of fairly questionable quality, but even so her behavior with Jae-min in the parking lot was esurprisingly awful. I see now why Jae-min likes Ra-hee, or at least thinks he does. Jae-min knows that his mother is mean, and can't stick with anything or show any patience at all. So he's latched on to a woman who seems like she deserves loyalty because she gives it in turn.

This is sadly ironic, knowing what we do of Ra-hee's personality elsewhere. But then, the main clue Jae-min could have about this is Ra-hee's prior divorce, which Jae-min chooses to interpret in a favorable light to her due to fond memories of his father All of this is potentially interesting- but unfortunately, it also all works at the expense of the main character's likability. Also relatively little screen time is devoted to Jae-min's character conflict, since mostly this episode is just petty sniping between Ra-hee and Min-hong.