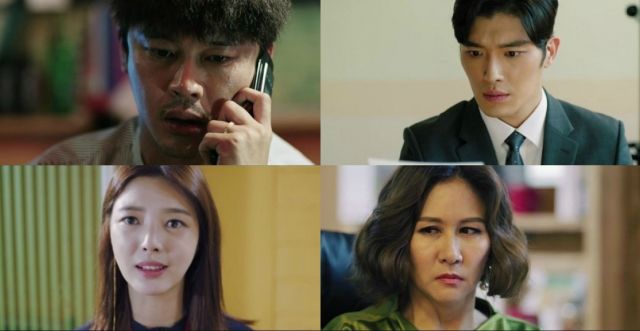 Min-hong, having finally figured out what Ra-hee is up to, lapses into alcoholic depression. I mean it doesn't go on forever, just a single night as far we can tell. Then it's on to revenge. But even that is pretty light. Right at the moment I thought Min-hong was going to do something explicitly petty and mean instead he turns right around and confronts Ra-hee on how she's accepted Jae-min's marriage proposal without fully cluing him in to what's going on.

This is something I've been waiting on for quite some time- that "Single Wife" would finally acknowledge that even by wacky situation comedy standards, Ra-hee is really not a very good person. Her main character traits are, and always have been, that she was too scatterbrained to finalize the divorce herself, too petty to work with Min-hong to get it done now, and too insecure to simply tell Jae-min the full context of what's going on. None of these traits bodes well for a long-term domestic partner.

That doesn't even get into Ra-hee's subtler moral failures, like how she never sees her own grandmother while Min-hong has been more than willing to make that effort for her, and doesn't want to stop even if he divorces Ra-hee. This, too, finally piles up as we're left with a situation where Jae-min figures out on his own accord what Ra-hee won't tell him. Or his own mother for that matter.

It's odd how In-hwa is still portrayed as vaguely villainous when her behavior is actually far more defensible than Ra-hee's. In-hwa can at least plausibly claim that her actions are motivated by a concern for Jae-min's future well-being. I can't really visualize In-hwa trying to impede, say, Hyo-rim's clumsy attempts to hit on Min-hong, since by any objective account Min-hong is a sincerely nice person who also has a strong interest in the furniture design industry.

That "Single Wife" has now explicitly acknowledged Ra-hee's ethical problems is good. But unfortunately, I doubt this will have too much impact on the overall dramatic thrust. It remains clearly telegraphed, as always, that Min-hong is the right guy for Ra-hee and Jae-min is the wrong one. But the irony is palpable. We're supposed to see it this way because Min-hong is the more obviously empathetic guy who is expressly pining for Ra-hee. But Jae-min does not have these moments largely because Ra-hee's dishonesty has robbed him of opportunities to express himself like that to her.