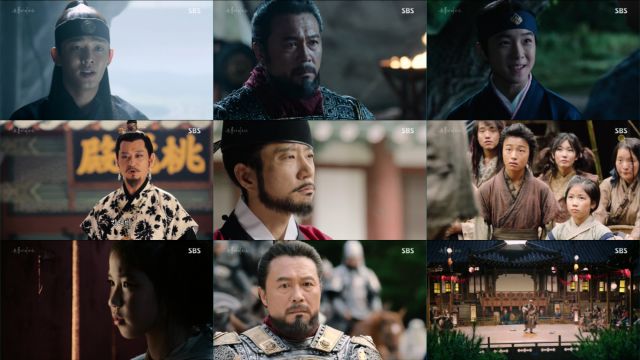 Immediately prior to the Joseon era Korea was kind of a giant hot mess. "Six Flying Dragons" doesn't get into too many details on how or why this happened. All that's known is that General Yi Seong-gye (played by Chun Ho-jin) is a capable leader who appears to be the target of constant attempted subversion precisely because he is a capable leader, and the people in the palace don't seem to have anything better to do with their time than to gossip about him. The situation is a little absurd, actually- although that's part of the point.

Seong-gye is an extremely important historical figure, but "Six Flying Dragons" makes the interesting dramatic decision of telling the story mainly from the perspective Seong-gye's son and successor Yi Bang-won (played by Nam Da-reum). From Bang-won's vantage point Seong-gye is the coolest general / dad in the world, and it's obvious that Seong-gye is destined for greater things. And yet Seong-gye feels so strongly about the importance of honor and humility that he cruelly kills any kind of romanticism Bang-won might have about, well, war.

It's a marked contrast to what happens in the palace, especially by the time we've gotten to the end of the episode and seen firsthand just how completely unhinged the palace characters really are. Seong-gye is forced to choose honor before reason. What's more, it's pretty clear that this is a decision that has to be made every single time he has a conversation with anyone with some sort of higher rank.

Seong-gye is a fascinating historical character because by all rights it seems like he should be a despot. What else would you call a general who takes over the government? What keeps Seong-gye's humility from turning into explicit militaristic hero worship is that Seong-gye's main ethical objection is rather paradoxically the fact that he wants less wars. Even as Seong-gye teaches Bang-won important life lessons regarding personal honor, he has to deal with other adults who rather obviously have not had these life lessons.

The thematic territory is pretty strong. Not only does "Six Flying Dragons" prime us for Seong-gye's very slow personal conflict, we also see Bang-won growing up and trying to decide what justice really means. Bang-won is a charming figure who's very at ease with members of the lower economic classes- far more than the high level men in the palace and their rather...unsettling resource allocation. In short, I'm intrigued.