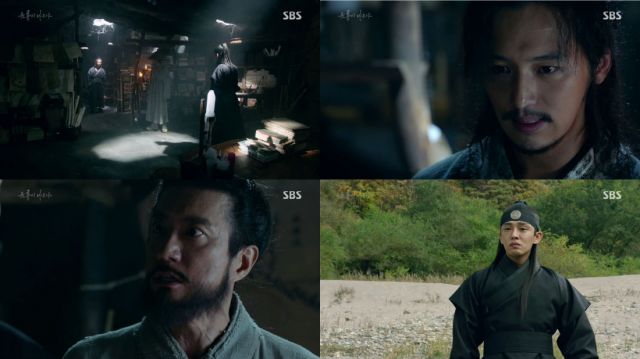 The episode starts out as a standard victory lap, because it seems like everything is going great. At least that's what it seems like from Bang-won's somewhat aloof onlooker status. What Bang-won isn't aware of is that Do-jeon's plans work from very minute calculations, and even unexpected help in the short term can cause major problems in the long term. Do-jeon needs moral authority more than anything else, and Bang-won undermines that.

It's always worth noting that, to different characters, "Six Flying Dragons" is a completely different kind of story, albeit one that's more on a spectrum than anything discreet. For Do-jeon, Ttang-sae, and Yeon-hee, this is a completely serious game of kingdoms and leadership that will resonate throughout history. They don't have time for anything fun. With Bang-won, Boon-yi, and Muhyul, the story is at least partially a romantic adventure.

And most significantly of all there's Seong-gye, Yeong-gyoo, and all the villains. These characters don't think there's any story going on at all here. Everything that the other characters are fighting for is just a sideshow that will have to die down sooner or later, because the Goryeo regime has stood upright for so long that it's impossible to imagine any set of circumstances could lead to its wholesale destruction.

That's the real conflict of "Six Flying Dragons" that makes it somewhat difficult to parse. This isn't a struggle of good versus evil. It's a struggle of tactics versus passion versus disinterestedness. On most levels these distinctions are purely philosophical, which is why so much of "Six Flying Dragons" simply consists of philosophical conversations. There's more explosives in the confrontation at the cave between three characters who are technically on the same side than we ever see regarding the actual villains of this drama because ideas are much more dangerous than people.

They're also much harder to kill, although the temptation to kill people along with their ideas is certainly a strong one. That's the big irony of pitting tactics against passion. You can only real kill passion by acting passionate, and by acting passionate you defeat the entire purpose of tactics in the first place. The only problem with all this is that since "Six Flying Dragons" is once again telling its story almost entirely with dialogue, it is very very easy to get disinterested and bored. "Six Flying Dragons" is a drama for those in the mood for serious rumination.