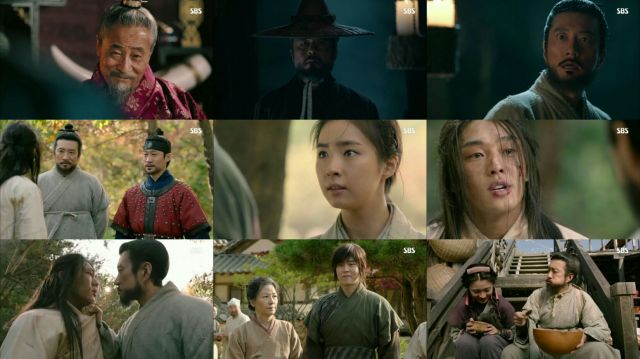 For all practical intents and purposes Bang-won has become a damsel-in-distress. In this way he indirectly manages to become the impetus for Do-jeon and Seong-gye to finally join forces, creating a rather mixed metaphor. Bang-won is only in this situation at all because of the poor choices that he made. And yet it's quite unclear if or when Do-jeon and Seong-gye would have started cooperating if they had not been united by this common goal.

That's the main thematic ambiguity that's going on here. While Bang-won has certainly been humbled by his experiences in prison, at the same time he never really breaks completely. He also probably doesn't appreciate just how ridiculously complicated the process was which finally allowed for his release, mostly because during this time Bang-won was in prison and, by design, had no real contact with anyone who could explain what was actually happening.

The scheme is so complicated, in fact, that I found myself wondering right until the end of the episode just how much of the proceedings were elaborately staged. Certainly the set design takes a term for the theatrical. I laughed out loud at the secret door because the whole thing just looked like something out of a comic book. The way so many characters are always wearing hoods to protect their identity was also a pretty good hook, as was menacing dialogue to the tune of "oh, you'll find out when we get there".

Mostly, though, I'm surprised at how well this episode worked just being self-contained. If you wanted to convince a friend to give "Six Flying Dragons" a shot, this episode would definitely be a good primer for the kind of broad political skulduggery and dogged action that characterizes the drama at its best moments. You don't even really need to know who the characters are, because aside from the leading figures everyone has a deliberately ambiguous alignment.

The only real problem with a ripping action yarn is that nothing really makes complete sense until we hit the ending, and once we hit the ending, the important things that happened can be pretty easily summarized. While "Six Flying Dragons" has obvious greater pretensions to being a historical epic, this episode is planted pretty firmly in the ground of being exciting mainly in the moment- kind of like a good detective show. Which is definitely different than the usual. Still good, but different.