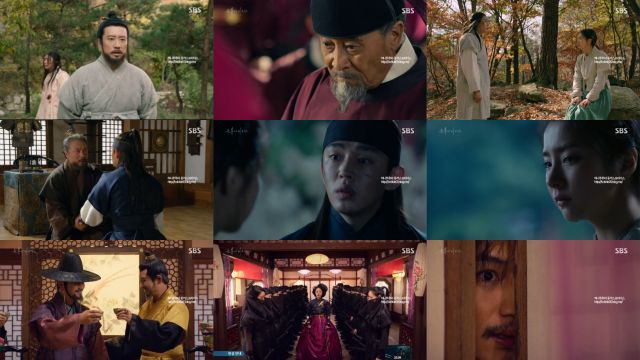 The opening portion of this episode clearly establishes that, at least for the moment, Bang-won has managed to learn some badly needed humility. It certainly helps that when explaining himself, Bang-won gives nearly the exact same tearful explanation that Boon-yi has been spreading around. Bang-won is in this to help the common people, and it's mainly his fervor that got him into this mess. But with that common goal, Bang-won's loyalty is unconditional.

Boon-yi makes for a nice parallel, as she comes to appreciate that the situation is different for completely different reasons. Any murmuring of a potential romantic relationship between Bang-won and Boon-yi are stopped up by the realization on Boon-yi's part that as dragons, neither she nor Bang-won can afford to discuss any subject aside from the long term goal of creating Joseon. That much is just political reality.

It's a rule help pretty consistently by all the characters, really. Note how we see little to nothing of the personal lives of any of the major political players in "Six Flying Dragons". Almost all of them are probably married and have children. But with all this important stuff going on they can't spare a minute to be husbands or fathers. With Seong-gye this is an explicit plot point. Bang-won is one of many sons Seong-gye rarely ever actually sees.

On the more negative end, I was rather annoyed with what happened with Ttang-sae this episode. The first evasion was accomplished well-enough, but the second one just obliterated all plausibility. The bad guys were this well-prepared and yet they couldn't catch the one guy when he was being slowed down by a female accomplice? And that's not even getting into the sheer dumb luck required for Ttang-sae to end up after all that in exactly the right place and exactly the right time to learn the important information necessary to set up the cliffhanger.

Scenes like this are especially annoying because at its best "Six Flying Dragons" has an especially tight and effective script. Note the entire sequence of events last episode- and the observe how at the beginning of this episode, the bad guys just don't roll over and admit they've been beaten. They continue to fight and are willing to take actions outside of official spheres if that's what's necessary for them to maintain a stranglehold on power. If the dragons are going to need a lot of time to defeat Goryeo, Goryeo has to consistently be a formidable opponent.