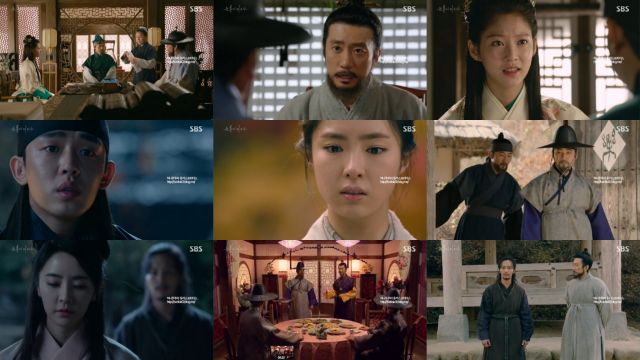 Now that the loyalties have more-or-less been clearly cemented, it's time for the "Six Flying Dragons" to get to work. Bang-won is able to prove his usefulness to the group somewhat hilariously by not actually doing much of anything. Any one of Seong-gye's sons could have done what Bang-won agreed to do. It's just that Bang-won is the only nearby enough and willing enough to act as a proxy for marital purposes.

That's certainly one way to make Bang-won feel humble, especially since Boon-yi, far sighted as she is, already figured out last episode that now is not the time for romance, since everyone knows the true meaning of marriage is to put together social alliances. I definitely have to give the writing team credit here- this whole sequence well illustrates how to this level of political power player, literally the only time personal lives are important is when they can be used for some sort of tactical advantage.

The discussion of personal versus political lives here is for the most part just a continuation of the ethical issues presented in the last episode. The subject material is kept fresh mainly by virtue of how more characters are involved. Ttang-sae, after having spent so much time practically as a lone wolf, is finally given some clue as to what's going on in Do-jeon's organization.

Ttang-sae still seems to be a ways off from being a genuine ally, though, in part because Muhyul is already on the team, and so far their potential roles appear to be overlapping. What's the point of having two different characters who are really good at swordplay? Typically when such characters are on the same side we're practically expecting a reason for them to get into a fight, and after what Ttang-sae has learned, there is good reason for that.

If there's any downfall to this episode it's that the main crux of the planning ends up being very indirect. Do-jeon is still preparing for the next battle, and effectively preparing for the next battle means gathering as much energy as possible. "Six Flying Dragons" does appear to be moving in phases where that much is concerned. Even the marriage does not, strictly speaking, actually happen this episode because so much negotiation is necessary in order for the characters to actually get to that point. More the same story really- Do-jeon's plan requires patience, and the viewer needs it too.