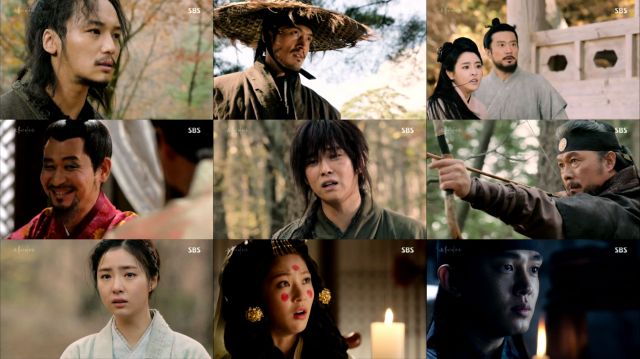 I've mentioned it before and it bears repeating- the excitement level of any individual scene in "Six Flying Dragons" is directly proportional to how many dragons are present. And the rather glorious opening battle sequence involves all six of them. Granted half of them are just helpless bystanders but even so. Everyone is finally and completely in agreement on what the long-term goal is, and how they're going to accomplish it. Fighting off assassins is just the most stylish way to show this off.

Character-wise Ttang-sae has fully relinquished his old identity. Consequently, from here on out I'll be calling him Bang-ji. It's funny, really, because in most ways Bang-ji was never really willing to give up his old identity. But now that he's been confronted with his old girlfriend and younger sister in the face of a new cause, Bang-ji can finally accept that there's no hope for the past life. I rather liked the look on Yeon-hee's face as he confesses this. Most of the time that's the exact opposite of what a woman wants to hear.

Elsewhere, Da-kyeong (played by Gong Seung-yeon) is now officially Bang-won's wife, although she acts like this is a temporary arrangement. I couldn't help but find that whole scene terribly amusing, mostly because while Da-kyeong is acting all stiff there's the subtitle reminding us that she's going to be queen. Da-kyeong's probably going to be good at that, given her obvious preference for political tactics over wishy-washy feelings.

Speaking of wishy-washy feelings, Muhyul has really grown on me as a character because the guy's just so well-meaning and sweet. Yeah he's kind of dopey but that really is a big part of his charm. I'm kind of hoping he gets together with Boon-yi but I'm not sure that can be reconciled with his role in "Deep-rooted Tree". Strictly speaking there's times where his appearance in "Deep-rooted Tree" are the only clue we have that Muhyul even survives "Six Flying Dragons", because Muhyul's decision making abilities aren't always great.

About the only complaint I can come up with this episode is that the latter part moves very heavily towards the political maneuvering between Do-jeon and the various ministerial antagonists. It's not that there's anything wrong with the construction of the plot, I just find that stuff less interesting as a matter of personal taste compared to excellent characterization and swordfights that "Six Flying Dragons" really nails quite effectively.