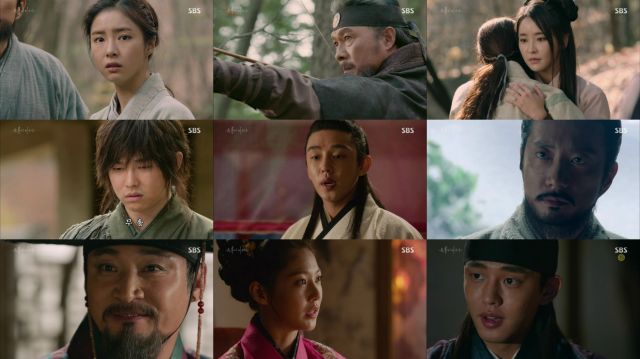 In-bang (played by Jeon No-min) is at present the major antagonist of "Six Flying Dragons". I'm never sure which villains to discuss at any given point in this drama, because there's just so many of them. In-bang, though, is such a powerful driving force here that his presence is impossible to ignore. The man just runs roughshod over every possible obstacle to the point that an insanely elaborate scheme is all that's able to even slow the guy down.

This means that, unfortunately, there's relatively little for most of the dragons to really do here. Muhyul briefly appears to be doing something important, but it predictably turns out that he was just practicing for some undefined later date when some errand comes up that requires his swordsmanship. How disappointing that the gang has finally all gotten together but most of them don't even have anything all that important to do.

Of all of them, Bang-won is the one who lacks sense enough to back down from a situation regardless of the risk. Although in this case his basic reasoning is correct. If In-bang is strong enough to bring them all down, it doesn't actually matter how many weaknesses have been exposed or even if Bang-won himself ends up dead. In the long run they're all finished, and in that case they might as well go out with a bang.

While the climax is the most bombastic example of this, I actually preferred Bang-won's scene with his wife, mainly because it takes the form of a ridiculously stiff negotiation. I find myself wondering how these two are ever going to have sex even once, let alone have eleven kids between now and her fortieth birthday. I could easily see Da-kyeong drawing up contracts ahead of time. Or at least I could- Bang-won makes a fairly salient point this time about how Da-kyeong has a right to know his weakness, because now they're her weaknesses too.

But the interpersonal elements of "Six Flying Dragons" are a pretty low level of importance this episode, since for the most part we're just dealing with more self-contained action. While exciting, the problem with these kinds of elaborate schemes is that there's not really much about them worth discussing. Except, possibly, for the fact that Bang-won is still demonstrating a strong desire to go rogue whenever he feels it's necessary- and this won't be the last time, not now that he's emboldened by success.