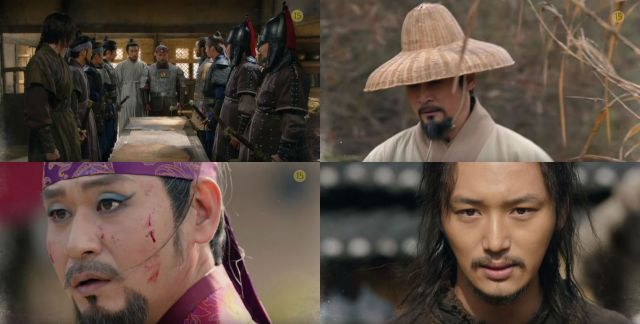 After Bang-won's daring move last episode, there's not really much left to do but hunt In-bang down. Of course, the irony is kind of difficult to ignore. Yes In-bang was pondering treason but so are our heroes. What all of this is meant to establish is that one way or another the Goryeo regime is finished. The rest is little more than elaborate politicking meant to be used for the sake of moral authority. Well, there's that, and also securing the loyalty of the soldiers.

One of the big ironies about In-bang's elaborate escape sequence is that the proceedings never actually really turn out all that violent, even though there are soldiers everywhere brandishing swords. One early scene does an excellent job typifying this- the head monk who's frequently featured as an antagonist has to reconsider and change his mind several times before finally choosing a course of action. This is the kind of major storyline event that results in people actually dying. Any decision deserves a lot of thought in that context.

Once again, this is combat in the style of Sun Tzu. You win battles by not actually having battles in the first place. The threat of force should be enough to get your opponent to back down, provided that the stakes are obviously enough defined. This of course leads to a major weakness- if the entire thematic stake of this episode is about characters not fighting, that puts the episode at a pretty serious overall risk of just being, well, boring.

The usual production values are what keep "Six Flying Dragons" from faltering too much. It's always a big positive when everything looks so incredibly slick. Given the general emphasis on not-fighting, it's pretty important that the set design and costume work be put at a high emphasis. It's only possible to watch characters change their minds so often before the impatience for some actual action gets to be overwhelming.

And practically as if to taunt the viewer, director Sin Kyeong-soo decides to put the cliffhanger at the most ridiculous midway point possible, when a fight has finally managed to break out. Normally you put the fight at the end as a kind of reward for the viewer having to endure so much conversation. Although in this case, I suppose it does make sense to delay gratification if only to emphasize just how important all that strategizing really was.