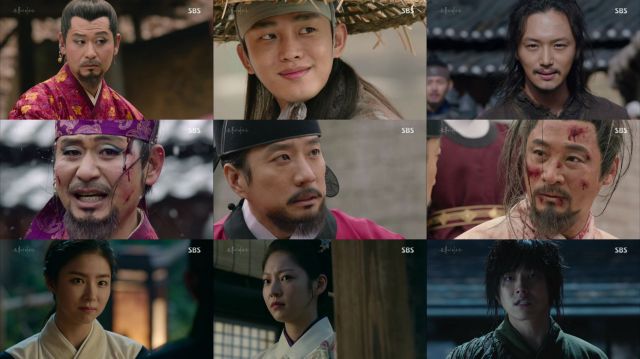 Straightaway the immediate important conflict of "Six Flying Dragons" is put to an end with a suitably epic swordfight. But before the swordfight is even over characters have already started discussing the new question- now what? It is, naturally, the villains who are asking this question. While they know who Do-jeon is and the general layout of the team that's been opposing them, until now none of the heroes has felt any reason to bother explaining their reasons.

There's good reason for that. In-bang and his followers are so widely hated by the common population of Goryeo that even if by some miracle they could be rehabilitated their presence in the new order would be considered a serious mark against Joseon's credibility. At the same time many of the deeply cynical arguments made by the villains do have merit. It didn't take a thousand years for Joseon to collapse. Technically the end of Joseon was the fault of the Japanese but they were only able to peacefully conquer Korea with the explicit consent of the upper classes.

For now, though, Do-jeon is a man with a vision. He actually goes to the trouble of writing down his great idea for how to build a proper government. I like how the other characters in the room are only barely able to follow along with what Do-jeon's talking about even though it's a pretty simple system. So far everyone's just been thinking about taking Goryeo down with no real thought as to what they're going to replace it with.

Except Muhyul, who hasn't put any thought into any of this at all, in his own usually adorable way. I really appreciated Muhyul just standing by, watching the events of this episode unfold, realizing for the first time that even if this has all just been an adventure for him for a lot of people the end of In-bang is a pretty big deal. Although mainly I just thought it was delightful the way Muhyul tried to engage Bang-ji in conversation.

Aside from the obvious resolution the main draw here is to just keep on the lookout for foreshadowing. In that regard I'm intensely interested in Da-kyeong, because her attitudes will almost certainly end up being a mirror of her husband's. How to interpret the look on her face during the whole tea scene? Is she jealous that Bang-won is talking to another woman for romantic reasons, or because this is exactly the kind of political discussion she wants to be in on?