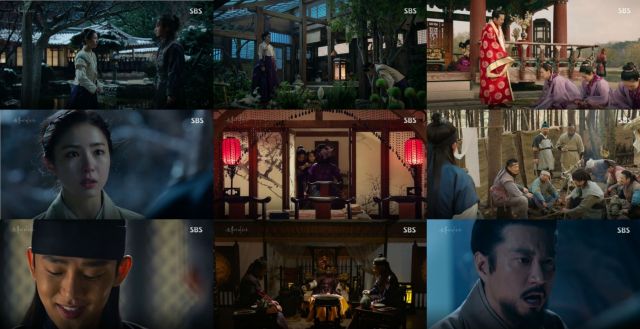 King Woo (played by Lee Hyeon-bae) only just now makes his appearance this episode. There's good reason for this- King Woo does not have what anyone could really call serious political talent. Indeed, the only reason King Woo even shows up this episode is because monarchal authority is invoked as part of the new increasingly complicated plan by the antagonists to maintain Goryeo, and with it their iron grip on the kingdom. It naturally does not occur to anyone that guys like King Woo are part of the problem. Except for the heroes of course.

Historical Korean dramas that deal with famous personages often have serious overlap, and as much as I'd like to forget the latter drama, I can't help but compare "Six Flying Dragons" with "The Great Seer". In "The Great Seer" the antagonists were more aggressively incompetent rather than actively malicious, and portraying King Woo either way is just a matter of dramatic license. I doubt anyone actually knows what the man was really like.

That kind of detail throws me out of the narrative a little bit, realizing how so much of the tone is just made up. So I suppose it's fortunate that aside from the political machinations, the main draw this episode is an elaborate murder mystery. Sort of? I don't know- to be honest that plot point didn't really grab my attention so much. But then I'm kind of weird in my tendency to obsess over my character conflicts.

Like the whole dispute between Na-kyeong, Boon-yi, and Bang-won regarding proper forms of mutual address. Na-kyeong brings up a good argument, yet by the time this information is relayed to Bang-won, the future King shows off what a totally cool guy he is by insisting that for him degrees of speech formality imply intimacy and trust. That much seems to be setting Bang-won up to be a just future ruler who discriminates against his subjects equally based on individual skill rather than formality.

And yet the historical context is constantly lurking around the corner. If you know the history behind "Six Flying Dragons", these moments are horribly ominous even if in the immediate context they seem light and bubbly. Even though King Woo is the main important immediate character in the long term Seong-gye's wife Lady Kang (played by Kim Hee-jung-II) is the person we should be looking out for. Unfortunately political ambition will not cease to be problem in the new Joseon regime.