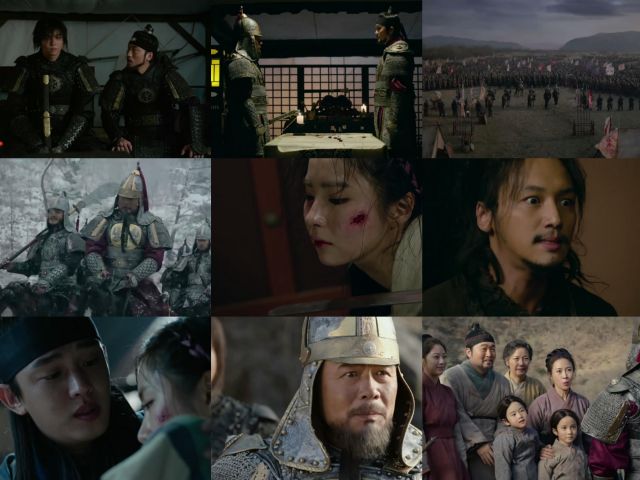 Now that Seong-gye has decided to actively and forcefully move against the current Goryeo regime, the main obstacle in his way is...more obstacles. It would appear "Six Flying Dragons" is still decently far away from Seong-gye actually being able to match his ambitions with action, because first the proper political warnings need to be exchanged. And also there's still the whole hostage situation.

Much like the last episode, this episode of "Six Flying Dragons" is difficult to properly critique because there's not really that much going on in the terms of broader messaging. We know that by the end of the episode these obstacles are going to have be cleared, and in the immediate term the main question is how these feats are going to be accomplished. As usual "Six Flying Dragons" is able to make the proceedings decently exciting, but that's about it.

Some points worth appreciating are how military power alone is consistently portrayed as not useful unless properly utilized. While Bang-ji and Muhyul both get important fighting scenes, by and large they're relegated to waiting and watching until the proper opportunity comes uo to properly utilize them. Seong-gye turned back the army because he wanted to avoid casualties, and it would be very counterproductive to kill any more people than necessary in order to evert the war.

We also get to see the excellent extent to which Seong-gye has allies just about everywhere- most notably with his large number of sons, almost all of whom appear to be military officers. Even if Bang-won is obviously the most competent of the bunch, Seong-gye has clearly imbued all of them with a strong sense of honor and loyalty, such that nearly all of Seong-gye's allies function well as a cohesive unit even when they have no way of contacting each other.

That's the unifying power of common cause, which perhaps best shows itself in the way the hostage situation is finally resolved. Bang-won and Boon-yi are able to effectively maneuver toward mutual resolution even though they're working in isolation. Alone they would have failed. But because both of them were able to keep trying, and also had trust that their allies were working on their own escape plan, the situation is able to resolve with relatively little mess. Obstacles removed, all that stands between Seong-gye and Goryeo is an army. Odd how that by far appears to be the least intimidating roadblock.