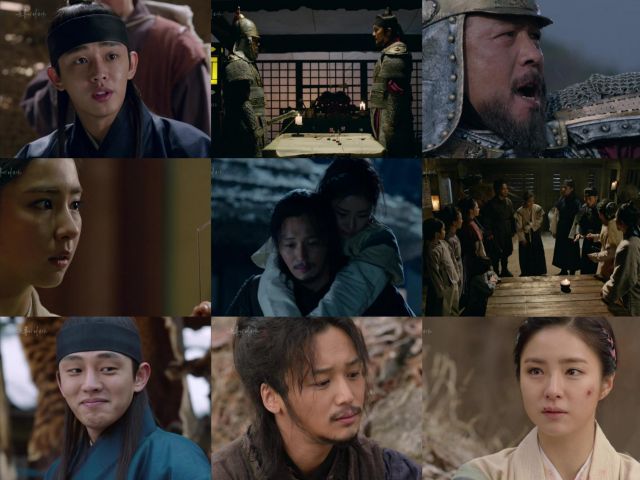 As expected, the big climactic battle in "Six Flying Dragons" is so ridiculously one-sided that there was barely even any point to showing it. The huge fight scene is mainly just an exercise in letting Seong-gye's soldiers show off just how tough they really are, and how any attempt at resistance is futile. King Woo, for all his aplomb upon entering the scene a few episodes ago, is quickly resigned to give up here because there's just nowhere else to go.

Once that's all settled with, it looks like smooth sailing as Seong-gye can now finally become King. Ha ha, not so fast- Seong-gye becoming King is what happened in the historical record. It's also what nearly everyone is expecting at this point, and why shouldn't they? The Goryeo regime was terrible, and now that Seong-gye has disobeyed direct orders once there's no reason for him to ever obey anyone else's orders ever again.

Even so, that's not what's supposed to happen just yet. Successfully transitioning from Goryeo to Joseon requires the air of legitimacy, and Seong-gye doesn't have that through show of force alone. If Seong-gye were to take control of the government right now it would just turn into a dictatorship. Seong-gye doesn't want that, and neither do most of the other characters in "Six Flying Dragons". At least as far as the ones who have already been introduced go.

It's from this backdrop that the dragons go from the task of military battle to the equally important goal of...finding out who's teaching all the adorable little street urchins to sing happy songs. No, really. Those who follow contemporary Korean politics may recall that the in the 2012 Presidential Election Park Geun-hye was the beneficiary of an online campaign by the National Intelligence Service to post Internet comments in her favor.

That too sounds completely irrelevant at first blush and it's an open question whether the comments actually did much to influence the election. The suppression of the scandal until after the election, well, that's a different story, although it all moves to the same point. Now that the dragons have more-or-less succeeded on the political end of forcing the Goryeo regime to moderate its behavior, the future of the country is going to depend on public opinion. This represents an entirely new venue of persuasion for the dragons- one where the moral high ground might not be so easy to maintain, given the lack of obvious villains.