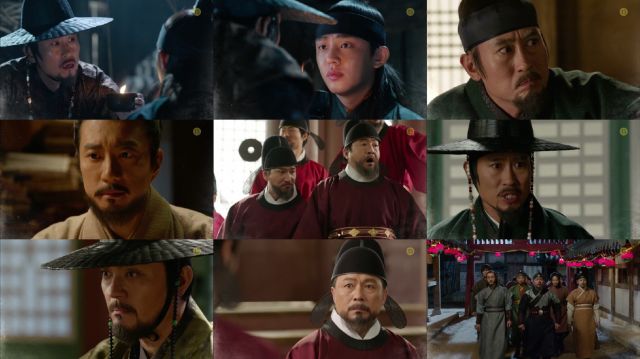 Among Ryeon's more eccentric abilities is face reading. While this probably comes off as kind of gimmicky it's actually the most important thing Ryeon does this episode- once the dragons are able to regroup and pull victory out of nowhere all Ryeon is left with is the knowledge of what he's learned about the major players. As usual, it's going to be a long time before we get much of a payoff on this but what do you want? We're not even at the halfway point yet.

We know this as viewers. Note, however, that the characters themselves are completely unaware of the fact that "Six Flying Dragons" is still nowhere near completion, and for good reason. Ryeon apparently lies completely defeated after the opening setpiece- even Ryeon himself thinks as much. Other villains decide that this is not a fight currently worth pursuing. Do-jeon is making effective incremental political progress. Or is he?

Another long-forgotten pops up out of the woodwork near the end of this episode. The man really isn't anyone important in the great scheme of things, but his presence is more symbolic than it is a direct threat. Many of the people who worked for Goryeo were genuinely awful human beings, and not all of them have been executed or even had to admit that they did anything wrong. What's more, such revelations are not likely to be forthcoming. Do-jeon's main bargaining chip is the promise that there won't be bloody reprisals.

The problem is that these anatagonistic figures do still in fact have power- not that much, but enough to possibly score another reversal against Seong-gye and Do-jeon, as the cliffhanger ominously implies. And they're not as inclined to hold back in the bloody reprisal department, given past behavior. This all makes for quite an effective metaphor regarding difference in method. We know which way Bang-won is going to tilt in the long run, and it's not just a matter of physiognomy- circumstances will also play a part in this decision.

So, in short, "Six Flying Dragons" is badass as usual- intense action to start out with, politics for the middle and end, and interwoven with all that is the story of Boon-yi, Yeon-hee, and Ttang-sae dreaming of the possibility of going back home. Not that they ever really can. Ttang-sae changed his name to Bang-ji for good reason. This was never going to be an easily solved political crisis.