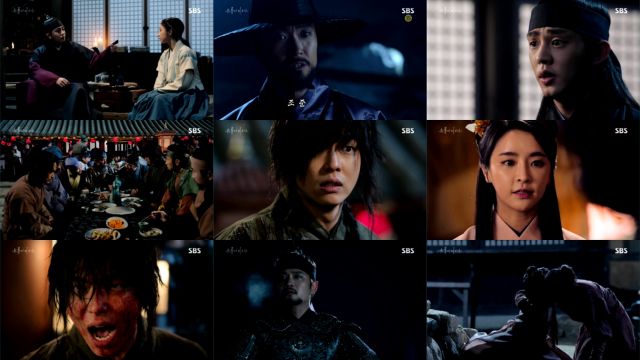 The first portion of the episode deals with the political power players sharing information and discussing political philosophy, until Do-jeon finally figures out what we knew from the beginning. Those guys hiding in the back room with axes aren't planning to liven the party up with a logsplitting demonstration. Bang-ji always suspected something strange was going on, but for the wrong reason. It's hard to be excited to break bread with a guy you so desperately want to violently murder.

This conflict has always been the implied central purpose of "Six Flying Dragons" - to rule through diplomacy and wisdom, or through brute force? And the production of this episode well demonstrates why bloodletting time and again comes off as the more satisfying process. Why share power when you can have it all for yourself? What's more heroic, having a polite dinner, or facing down an entire army with only a couple of buddies to back you up?

The huge battle is epic and cool, and this is exactly the problem. It emphasizes how when it gets right down to it, Do-jeon is all talk. He has to rely on other powerful men in order to put the Joseon political agenda in place. Do-jeon and Seong-gye may be going about this Joseon business in the mature appropriate way, but that's what nearly brings the entire conflict to a murderous end this episode.

And even if the dinner has been a legitimate success, that still begs the question- did we really want to see Seong-gye make nice with these guys? Consider the entire final sequence. Faced down with this man, again, the sensible response would be to try to take him alive for the sake of information gathering. Ask yourself this question. At that moment, what would you do? Be the sensible long-term thinker Do-jeon, or take by force the revenge you feel you so badly deserve?

It's a tough feeling that's hard to mistake, given how we're shown in flashback what happened the last time this choice was presented- and how ever since that moment, our characters have struggled with an unjust system that doesn't pay back favors of kindness. It's pretty harrowing stuff- "Six Flying Dragons" makes an effective argument here for straight-up murder, and that's really about the best kind of morally grey storytelling possible. Evil men shed no tears and have no regrets- a good person who commits evil needs both of those things.