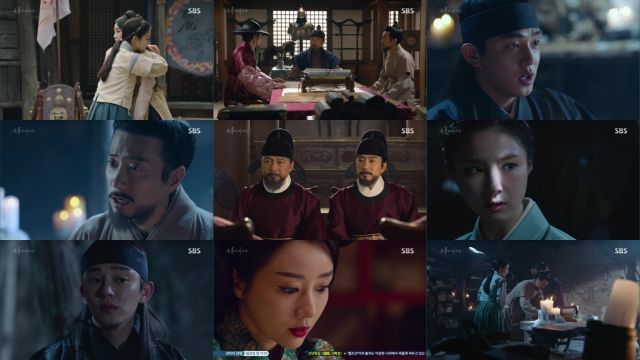 One frustrating fact quickly becomes clear in the aftermath of the massive battle- whoever's bankrolling this operation has enough clout to keep his identity from being discovered. While we don't see too much of the sentiment this episode, it's clear that for the long term the characters, and Bang-won in particular, are going to keep getting sucked into paranoia. There's really not any other way to react when the enemy could quite literally be anyone.

Yes, it's another episode centered more around ominous predictions than immediate action. Although "Six Flying Dragons" needs a breather anyway- the huge battle last episode is just about a completely impossible act to follow up on. Which is part of the point. If even that kind of military trap isn't enough to take down Seong-gye, would you want to risk exposing your identity, or keep trying to strike from the shadows?

The death of Yeon-hee's rapist is actually more significant to the broader tone of "Six Flying Dragons" than it may initially be seen. He was the last character who we could reasonably call an unambiguously terrible person. The remaining antagonists, while not exactly nice, are at least open to the prospect of negotiation. Which does beg the question- why are they continuing to fight Seong-gye and Do-jeon instead of trying to make peace?

That much is a matter of perspective. Think about it. We can frame Seong-gye's actions in the larger perspective of the greater good as much as we like, but at the end of the day he disobeyed direct orders and marched his army against fellow Koreans. However noble the goal, Seong-gye has established the precedent of rule by force. He's the leader of a military junta who's refusing to take the title of the country's leader practically as a formality, because everyone knows full well that Seong-gye is the guy in charge. From a certain point of view Seong-gye is the real villain here, and the attempted massacre merely an effort to restore the government's integrity.

I'm just speculating here- that much is easy to do when "Six Flying Dragons" is based on an existing historical record, but thematically these issues do make sense. Bang-ji, Yeon-hee, and Boon-yi have finally actually gotten somewhere. They have hope, and yet they still fight for fear of the potential damage if they stop. When will that ever cease to be a valid excuse? Can they stop, or will those who live by the sword die by the sword?