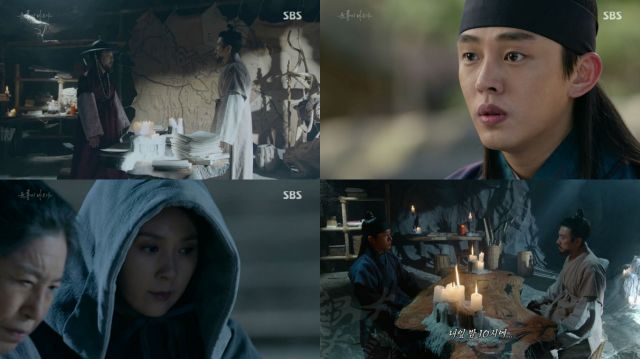 Mong-ju (played by Kim Eui-sung) is the new primary villain of "Six Flying Dragons", and he's a pretty unsatisfying one. It's one thing to fight against guys who want to start unnecessary wars and force peasants into serfdom. But Mong-ju is a scholar- an intellectual of similar mental weight and moral standing to Do-jeon. He's also quite possibly the first person who even understands what Do-jeon's greater plan is. A pity that Mong-ju thinks these goals can still be accomplished within the system.

And what is the system anyway? It's trying to get proper permission from the new King, a child prince who can easily be reduced to tears. It's hard to know which character we're supposed to think less of- Do-jeon, for making a child cry, or Mong-ju, who apparently seriously believes that this horribly dysfunctional political system could possibly be reformed. In light of the actual situation, debates about the relative merits of Buddhist and Confucianism seem a bit besides the point.

Especially since assassination is such a big ongoing thing. Incidentally, if you're familiar with who Mong-ju is historically...well, suffice to say it's pretty clear that this episode marks the moment where Bang-won starts to turn toward the dark side. It's not through any explicit action on Bang-won's part. It's just, the guy left the cave for a reason. Bang-won doesn't really care about greater philosophical issues. His loyalty is to the plan, not the philosophical underpinnings of the plan.

And even elsewhere the supposed villains of "Six Flying Dragons" are looking less villainous all the time. Take the cliffhanger, and the revelation therein which apparently comes out of nowhere. Really, what happened wasn't really all that surprising. While Buddhists have featured prominently as the bad guys so far a Buddhist is still a Buddhist, and secret societies notwithstanding they at least have general rules against acting too evil. They clearly see themselves, at this point, as fighting from a defensive position.

Once more "Six Flying Dragons" is in a waiting game. We know that sooner or later the situation is going to have to come crashing down, and that the various dragons have already started to utilize different methods when it comes to resolving immediate conflicts. It's only a matter of time before they're going to start fighting each other because, well...because they're not talking it over with each other. That's the trouble with Bang-won. He's not so hot about following orders.