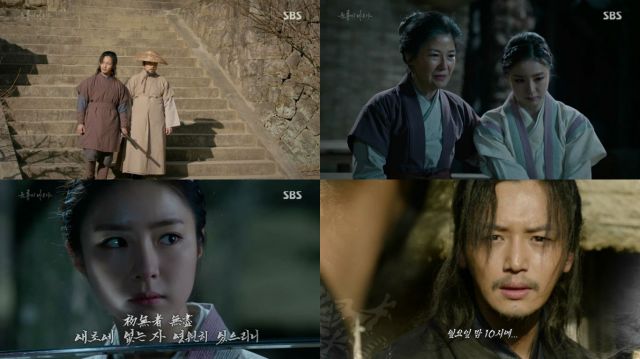 The heroes start out by raiding a monastery that is actively being used as a place of worship, then we move on to the torture chamber where they're still trying to bloodily squeeze information out of a guy who just isn't talking. The discordance between Do-jeon's philosopher kingdom ruled by justice and wisdom and the actual kingdom that is being ruled by threat of military force is getting wider all the time. Until the current conflict is resolved, though, Do-jeon is limited in options for how to respond peacably.

And there's the problem. At what point are the underhanded political threats ever going to stop? Bang-won is using the prerogative of national security to ignore any kind of ethical rules. Even though Bang-won himself doesn't have much of a physical presence this episode, Bang-won's brute philosophy is echoed through his brothers-in-arms. The New Joseon people are better than the Goryeo people, ergo, they're looking at a fairly low moral standard. Goryeo used to support the kidnapping of mothers from their children. New Joseon would never sink that low.

...It's at about that point that we learn important information regarding Ttang-sae and Boon-yi's character backstory which makes these arguments difficult to support. Again, Yeon-hee's rapist is dead. The people who were responsible for all the terrible grimdark story elements in the first portion of "Six Flying Dragons" are gone. The guys who are still around are, at worst, enablers of the old regime. Their current influence is severely limited.

"Six Flying Dragons" is playing a delicate balancing act between being a drama about exictement and adventure while also giving some not-so-subtle hints about how violence begets violence, and the more Bang-won comes up with creative exciting schemes to take down the bad guys, the more the bad guys are forced to escalate the situation and grab at any possible plan that will hopefully result in their not being horribly killed.

It's at morally ambiguous moments like that where I'm glad for the small stuff- like Muhyul's conversation with Boon-yi where they discuss their shared life experience of being virtual orphans. These scenes are very important because they establish a human element to the story, and offer a reminder that lower-level soldiers in the grand scheme of things here aren't motivated by grand visions of a new more just kingdom, but really just want to live a decent life on their own terms. Who knows whether they'll ever actually get that far.